Rabat - Tangier police arrested an Algerian citizen on Thursday in Beni Makada for the illegal sale of alcohol and drug trafficking. 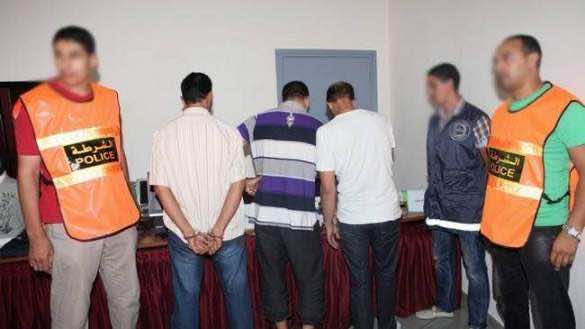 Rabat – Tangier police arrested an Algerian citizen on Thursday in Beni Makada for the illegal sale of alcohol and drug trafficking.

The suspect, whose identity was not revealed to the press, was a key member of an active criminal network in the Tangier region, according to Le360 news website.

Authorities have arrested other members of the drug trafficking cell, the same source said.

The Algerian man had allegedly been living in Tangier for the last ten years. Police discovered the suspect was associated with a group of criminals ‘under 30’ accused of smuggling and selling alcohol and drugs in the black market.

According to the same source, the suspect was the last ‘wanted’ member of the group who was still living free and involved in illicit activities in northern Morocco.

Police in Tangier now have all members of the criminal gang in custody.

The drug trafficker arrested was born in 1978, in Oran, Algeria. According to the same source, he had a criminal history of selling alcohol and drugs to minors in Tangier.

According to the same source, the criminal group was selling drugs and alcohol out of a garage in Tangier, with a banner that read “Dakka Marrakchia”.

Among the types of drugs found and seized by the Tangier police were prescription medications, cigarettes, hard liquor bottles, bags of powder drugs, cellphones, and even knives, according to images released to the media.