Rabat - German automobile manufacturer Mercedes posted a video on YouTube in late January that tells the story of Mohamed El Bacha, a Moroccan taxi driver from Essaouira who drives a Mercedes Benz. 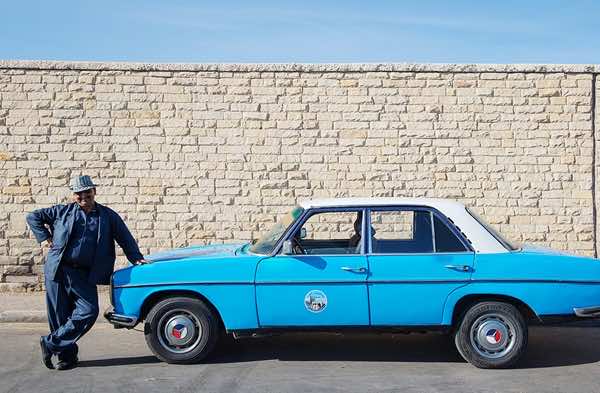 Rabat – German automobile manufacturer Mercedes posted a video on YouTube in late January that tells the story of Mohamed El Bacha, a Moroccan taxi driver from Essaouira who drives a Mercedes Benz.

In the video, El Bacha describes his epic journey as a Mercedes 240 taxi driver. “I bought this car in 1991, but it was in a really bad condition back then. It had been standing around for months. The previous owner had not really taken care of it. So I came and totally renewed the car, and since then I took care of it and will always love it. That’s the story,” El Bacha says.

In the three-minute video, El Bacha describes his abrupt career shift from pastry chef to taxi driver. He explains his love for his car that has never broke down.

“For the record: the car never broke down once, it’s been working flawlessly for 20 years now. These W 115 models just don’t stop all of a sudden. If there is a problem arising, you always get enough hints beforehand,” he says.

During a drive through Essaouira accompanied by jazz music, El Bacha asserts that regularly he has “about sixty, eighty, and sometimes hundred passengers a day.”

The video showcases the beauty of the Moroccan “Windy city,” including scenes of a picturesque sunset.

The drive concludes when the confident El Bacha drives his car onto the beach of the homeland of Gnawa music, explaining why the Mercedes is the best car for the taxi business. El Bacha passionately reminisces about the role of the Mercedes 240 in Morocco, a car that has become an integral part of many Moroccans’ daily lives.

“We just want Mercedes, it’s the only one that makes sense,” he says. “If there is a Mercedes, there is a taxi business.”