Rabat - King Mohammed VI appointed on Saturday in the southern city of Laayoune, Nasser Bourita, as Minister Delegate to the Minister of Foreign Affairs and Cooperation. 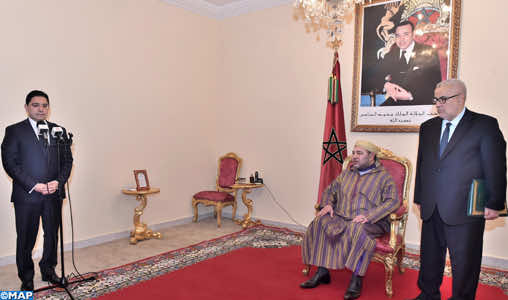 Rabat – King Mohammed VI appointed on Saturday in the southern city of Laayoune, Nasser Bourita, as Minister Delegate to the Minister of Foreign Affairs and Cooperation.

Nasser Bourita was born May 27, 1969 in Taounate. After a degree in public law (international relations) from Rabat Faculty of Legal, Economic and Social Sciences in Rabat in 1991, Mr. Bourita earned a Certificate in International Relations (1993), then a D.E.S. (equivalent to a Master’s degree) in Public International Law (1995).

In 2002, Bourita held the position of Head of the Principal Organs of the United Nations service before being appointed Adviser to the Morocco Mission to the European Communities in Brussels (2002-2003).

Mr. Bourita held the position of Chief of Cabinet of the Ministry of Foreign Affairs and Ambassador, Director General of Multilateral Relations and Global Cooperation.