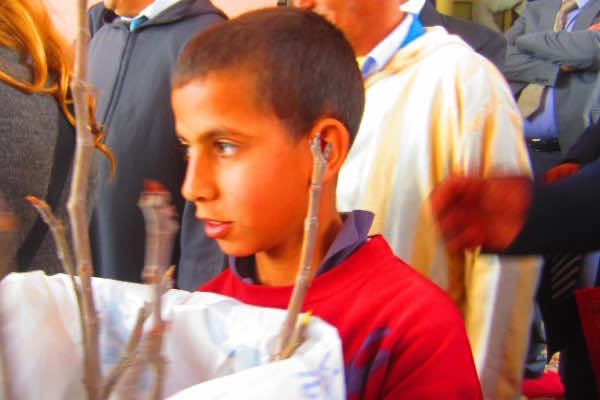 Marrakech – Unfortunately, we are living in a time in which interfaith relations are usually reduced to negative caricatures defined by the Israeli Palestinian conflict, the so-called Islamic State madness, or the Charlie-Hebdo massacre.

What is often forgotten in the media coverage is the long history of co-existence and the commonalities between persons of different faiths or, what the President of the High Atlas Foundation and former Peace Corps volunteer, Dr. Yossef Ben-Meir calls, our humanity, a quality he interprets to be closely intertwined with mutual respect for the environment. As an art and architectural historian, I see students learn this truism through the much maligned liberal arts and humanities courses, particularly art history and media and cultural studies. Dr. Ben-Meir practices it through the events and programs he and his team organize for the High Atlas Foundation (HAF) in Marrakech, Morocco.

HAF’s mission is to create sustainable development projects requested and controlled by the local communities and in partnership with the public, private and civil organizations. They take what the writer of the press release for the January 25, 2016 event describes as a participatory, democratic approach, asking members within the community to tell them their ideas, then organizing and pushing forward their projects with local representatives that bear HAF business cards. HAF projects are focused around five foci: youth, women, cultural diversity, clean drinking water, and clean energy, and include programs for encouraging organic farming to irrigation and solar energy. Other initiatives located throughout Morocco, especially the south and Sahara, are listed at their website. HAF is both a United States 501(c)(3) organization and a Moroccan non-profit association. Since 2011 it has held special Consultative Status at the United Nations Economic and Social Council.

HAF’s activities occur at a moment in which the Moroccan government with World Bank, United Nations, and United States government and nongovernmental support are sponsoring programs to encourage rural tourism, improvement of rural living conditions, and rural economic development. Country wide Programs are enumerated in the Vision 2020 plan for tourism and Maroc Green plan for agricultural opportunities. Projects include the creation of a tourist infrastructure in the countryside and possible exportation to European markets Morocco’s medicinal, aromatic, and beauty based agro-products researched by joint Moroccan, European, and American professors.

HAF is but one of the nongovernmental organizations working in conjunction with the Moroccan development agencies enacting local initiatives. The agencies include l’Agence pour la promotion et le Developpment du Nord, l’Agence du Sud, and l’Agence de l’Oriental. For each, and their donors, such as the World Bank, the United Nations, and the United States, improvement of the society is directly linked to creating jobs and economic opportunities, which, in turn, are enabled by education and training all of which have a larger goal of promoting Moroccan economic and political stability, preventing clandestine trade, and displacements of persons across urban/rural and national borders. HAF is distinguished from it counterparts by the focus on organic and energy efficient farming and development, and, thus, the introduction of Moroccan products into the lucrative export market for responsibly grown and created food, beauty, health, and fashion goods. The tree planting ceremony is part of the ambitious One Billion Tree Campaign to plant and distribute fruit trees, such as lemon and pomegranate, at Jewish sacred sites in and around the High Atlas. The larger goals are bringing communities out of poverty encouraged by subsidence farming and to help prevent soil erosion and deforestation. The organic fruit trees were grown on a nursery established on land lent to HAF by the Jewish community of Marrakesh-Essaouira in 2012.

The late January tree planting and distribution ceremony in the Tomsloht Commune, Akrich Village in the Al Haouz Province just south of Marrakesh was held on the fifteenth day of Shevat or Tu B’Shevat on the Jewish calendar. It is a day reserved for celebrating the new planting season, especially for fruiting trees. The ceremony was held in a fruit nursery next to the seven hundred year old resting place of a Jewish saint or marabout, Rabbi Raphael HaCohen, one of hundreds of Jewish sites of veneration throughout Morocco. Both Jews and Muslims venerate at his tomb, according to its Muslim caretaker. Legend has it that the shrine, housing for pilgrims, a synagogue, dining hall, and water well are on land donated by a local Basha whose life was saved by the Rabbi.

In attendance were the Wali of Marrakesh-Safi, Mr. Mohamed Moufakkir; the Governor of the Al Haouz province Mr. Younès Al-Bathaoui; the President of the Jewish community of Marrakesh-Essaouira, Mr. Jacky Kadoch; Dr. Ben-Meir; the United States Ambassador, the Honorable Dwight L. Bush, Dr., and members of the Akrich community. Invited guests included professors of agronomy and biodiversity, such as Ahmed Hakam and Ahmed Ouhammou, who is also concerned with preservation of the Marrakesh Toubkal National Park, and members of a nearby ladies’ couscous making cooperative, the Coopérative Aboghlo pour des femmes d’Ourika.

Also in attendance were HAF’s local project managers, including Hana Ezaoui and Amina El Hajjami.  Hana organizes fruit tree planting and education in the south at Boujdour, along with Jana Ceremniha, HAF’s Programing Assistant. Amina is the representative of the Coopérative Aboghlo pour des femmes d’Ourika. Local beneficiaries included school children, who also helped in planting the fig tree. David Bult, leader of Green Sahara furniture brought his next group of Moroccan youths from Asni who will be trained in in Casablanca to create designer pieces from fallen wood.

The HAF-CGI event was marked by a ceremonial fig tree planting ceremony and dispersal of trees to local farming families, especially their young men and girls. When I asked the young men later what they planned to do with the saplings, they said they would plant them in the middle of their homes, which usually have open courtyards, then, in a few years, enjoy and sell the fruit in the town market.

What struck me most about the occasion is what it said about not just Morocco at this juncture in history and economy, but as Dr. Ben-Meir said, our humanity and what brings us together. Trees have been cross-culturally venerated since prehistoric times. They have spiritual significance in Greco-Roman mythology, Zoroastrianism, the Vedas, Hinduism, Buddhism, Wiccan beliefs, Confucianism, Daoism, Shintoism, Sikhism, and Zen beliefs. They are venerated today by the three Abrahamic religions. In Gnostic Jewish beliefs or the Kabbalah, the Tree of Life is a way of describing all forms of existence. We learn from Edward Westermarck Ritual and Belief in Morocco (1926) the significance of trees and their reverence in Morocco, particularly of fig and fruiting trees.

Indeed, veneration of the natural world is part of Moroccan intangible cultural heritage, whether one has access to a garden in the center of a home or a field one cultivates. Symbolic representations of the natural world animates the arts and crafts of Morocco, particularly Berber or Amazigh woodworking and textiles, some of which are on display in Marrakesh museums like the Jardin Majorelle and the Tiskiwin. It can even be found in the contemporary arts of the Musée de la Palmeraie, particularly in the work of Farid Belkahia. Cannot their presence and our mutual awe and reverence of the environment bring us together in peace much like the arts, sports, and food, if not also the cross faith veneration of saints and ancestors?  And, if I may switch hats to one of a cultural programing officer, might not Vision 2020 to create rural tourist destinations also include gardens and greenery around the marabout structures like one might find in the New Orleans cemeteries and at Père Lachaise in Paris? Morocco has similar tourist appeal potential in its saint filled cemeteries, not to mention a way to show how Islam, Judaism, and Christianity are similar, and how Islam is religiously diverse, particularly in Morocco.

How the HAF CGF plans develop is a future investigation. There are a few challenges to working the rural areas of Morocco and Akrich is like many small agricultural towns. Though only a half hour from Marrakesh, a city characterized by large shopping malls and amenities, Akrich has a relatively basic infrastructure. There is at least some electricity, perhaps solar, near the marabout, however telephone service and Internet access is nearly nonexistent with Maroc-Telecom, at least, making communication with program organizers and distributors more difficult in this region. It is an agricultural community of small scale farmers with products, but little infrastructure for vending them for a profit that befits their labor, at least not yet and not outside their immediate locale. The saplings are a significant start. However HAF and their beneficiaries will need assistance in the future to bring their value and promise to fruition.

Colette Apelian is a researcher, visual culture specialist, and elearning expert based in Morocco.  Her publication topics include the histories of automobile and electricity, street and fine art, taxi and truck decoration, urban wildlife, the social use of commercial centers and advertising, food, and the environment.  Excerpts of this article are part of her forthcoming environmental and vegetarian food guides to be published during 2016. Her publications are for sale at Amazon.com.