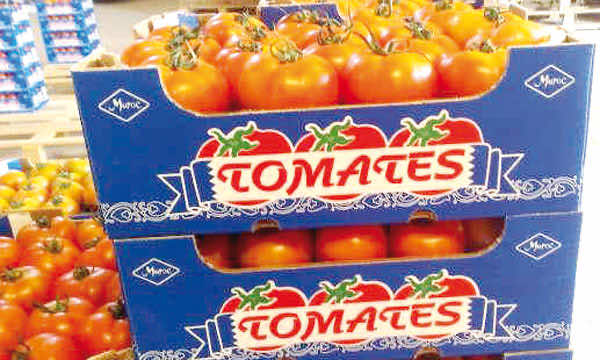 Rabat – Morocco has become the biggest single non-EU supplier of vegetables to Europe in 2015, in terms of both value and volume of goods exported.

The statistics were published by the Directorate General of the European Commission (Eurostat) and the Spanish Federation of Producers and Exporters of Fruits and Vegetables (FEPEX). They show that between January and October 2015, there was a 15% increase in Moroccan exports to the EU, valued at €630 million. In terms of volume, this amounted to 504,000 tons of goods.

Morocco now leads ahead of its three main competitors in the market: Egypt, Turkey, and Israel. Morocco’s main exported goods were tomatoes, which saw a 25% increase in value, bringing in €295.7 million worth of sales. Israel, which is Europe’s second supplier exported potato,

Egypt and Turkey ranked in third and fourth place, respectively. The former exported 288.73 tons of produce, earning €144.3 million in value, while the latter exported 138.94 tons of vegetables and earned €117 million.

Last year’s good weather conditions aided this healthy economic growth in Morocco, but forecasts suggest that 2016 may not yield as many vegetables for export. Warm weather and a lack of rain has heavily affected agriculture leading to a below average crop yield already. These high temperatures have led to a double-edged blow to Moroccan trade, as the warmer European climate has allowed for greater agricultural activity in European countries, especially in Spain and France.

Agricultural exports to Europe represent a major source of revenue for Morocco’s economy. According to a study conducted by Morocco’s Direction des Etudes et des Prévisions Financières (Directorate of Studies and Financial Forecasts), 91% of all food exports in the kingdom go to EU countries. The challenge for the future is to find the conditions to repeat last year’s success.