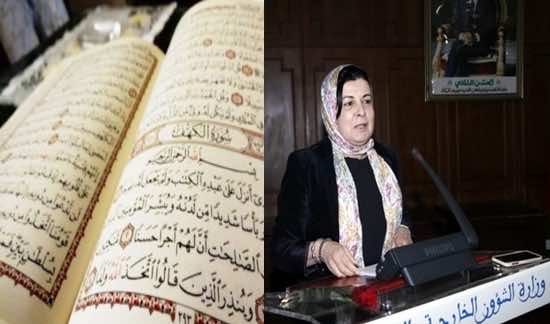 Several verses of the Quran include direct references to the equality between men and women, but these values have not been fully implemented in Islamic societies, according to Researcher Asma Morabet of the Center for the Study and Research of Women’s Issues in Islam.

During a press conference organized by the Ministry of Foreign Affairs and Cooperation in Rabat on Wednesday, the researcher called on Islamic scholars to bring the verses in the public sphere so that they can be discussed and the values within them properly implemented.

Morabet pointed out that countries in the Islamic world depend on interpretations of Islam from scholars who do not evoke the true meanings and intentions behind many prophetic and Quranic verses that uniformly point to gender equality. Instead, she said the scholars separate the verses from their original contexts when offering religious advice or issuing faith-based directives.

She referred to the seventh and eighth verses of the “Surat Nisssae,” or Chapter of Women in the Quran to provide an example of the problem. The verse directly states that men and women are equally entitled to an inheritance and further explains that while dividing the inheritance, orphans, those closest to the person who died and those in need should be prioritized.

Article 19 of the new Moroccan constitution – written and voted on in 2011 after Arab Spring related protests in the country  – also directly states that men and women are equal in the eyes of the government, but Morabet said that true equality between the genders still escapes the country. She added that reinterpreting Islamic texts to expose the values embedded within them could play a key role in encouraging the equal treatment of women in Morocco.