Morocco World News
Home Highlights on Morocco Locals Call on King to Investigate After Street Vendor Sets Herself on...

Rabat - A 42-year-old street vendor covered her body wtih paint thinner and set herself on fire on a road leading to Bouazizi earlier this week after local police officers stole her money and belongings while preparing Kenitra for a royal visit by King Mohammed VI. 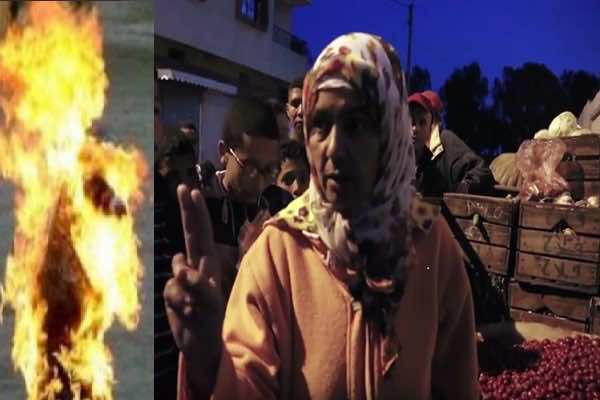 Rabat – A 42-year-old street vendor covered her body wtih paint thinner and set herself on fire on a road leading to Bouazizi earlier this week after local police officers stole her money and belongings while preparing Kenitra for a royal visit by King Mohammed VI.

According to Al Youm24, the woman, named Fateeha, used to sell candies and small items near a bazaar in Kenitra called Market of the Blessed Sons. The report said she suffered from third-degree burns all over her body and took her last breaths at the Ibn Rashid Hospital in Casablanca on April 12th after a hospital in Rabat refused to accept her as a patient.

People close to the victim told the Moroccan channel that after two police officers confiscated Fateeha’s money and belongings, she went to the head of the municipality to repossess what was taken from her. The local leader rejected the woman’s request and threatened to run her over with his car after he pushed her to the ground, according to an account of the story posted on YouTube by Febrayer, a Moroccan news site.

The woman narrating Fateeha’s experiences in Febrayer’s video called her a “martyr” with “good values” and added that local officers habitually stole from street vendors and others in the area, exploiting the city’s most vulnerable people.

“We are living like they do in Israel and Palestine,” the woman said. “We invite our king – known to be the king of the weak and poor – to begin an urgent intervention to investigate this crime because they will see that the officers made her suffer.”

She continued: “In Tunisia, there was a street vendor who set himself on fire and changed the government in its entirety, but we don’t want a revolution and create new problems. We just want the king to solve the riddle of this problem.”

The woman also spoke of a video cip she had seen that pictured Fateeha burning on the street with people watching, but failing to act. After a while, a young boy became the first person to take action and went around asking people for water or a blanket, but was repeatedly dismissed and told to stay inside his house.

Later, when Fateeha’s injuries almost overcame her, locals stepped in and brought her to the hospital in which she passed two days ago.