Taroudante - On Sunday, Morocco won the African Cup of Pastry, organized at “la Palmeraie Golf palace” in Marrakech, which will qualify them for further international competitions. 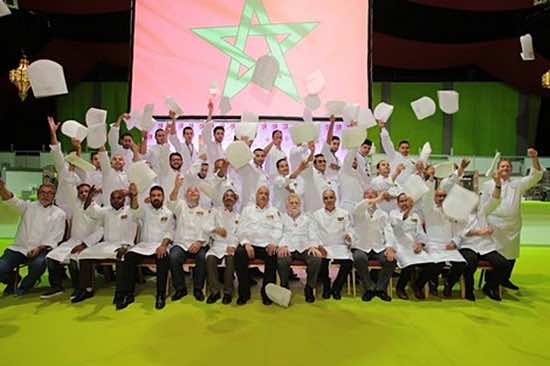 By
Larbi Arbaoui
-
Larbi is a freelance writer and assistant editor at Morocco World News.
May 3, 2016
Spread the love

Taroudante – On Sunday, Morocco won the African Cup of Pastry, organized at “la Palmeraie Golf palace” in Marrakech, which will qualify them for further international competitions.

The competition was organized by Rahal Event, in partnership with the Moroccan Federation of Culinary Arts, the National Confederation of Tourism (CNT) and the Regional Council of the tourist (CRT) of Marrakech.

Thanks to the wonderful performance of the Moroccan pastry chefs Osama Sadiq, Abdelilah Enniri and Morad Hilaoui, Morocco won first place, followed by Algeria and Tunisia.

Certificates of merit were also awarded to several Moroccan chefs in recognition of their efforts for the promotion of Moroccan cuisine.

Apart from Marrakech pre-selections, three other regions, namely Casablanca Centre, Fez-Meknes and Eastern and Northern Regions of Morocco, will also organize similar competitions. The winners will represent Morocco in major international competitions such as the Bocuse d’Or, the Passion Trophy, the Golden Hat, Pastry World Cup and Gelato World Tour.

In a statement to the press, the President of the Federation of Moroccan Culinary Arts, Kamal Rahal Salmi, stressed that this event is part of the commitment of the “Rahal Event” to upgrade the Moroccan culinary scene and ensure its strong global presence, adding that this competition was an opportunity for participants to showcase their skills in the field of culinary arts.

For the final event of Bocuse d’Or, which will be held January 24-25, 2017 in Lyon France, the Morocco team will compete with 23 other world-class chefs from around the globe for the trophy and bragging rights.

Morocco, which has a very good reputation in gastronomic and culinary arts, is the only Arab and African country present at the Bocuse d’Or.