Rabat - Morocco has dismembered 155 terrorist cells since 2002, according to numbers presented by Abdelhak El Khayam, the director of the Central Office for Judicial Investigations, on Thursday in Madrid.

Rabat – Morocco has dismembered 155 terrorist cells since 2002, according to numbers presented by Abdelhak El Khayam, the director of the Central Office for Judicial Investigations, on Thursday in Madrid. 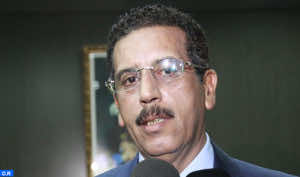 The director presented the figure along with several other metrics to measure the successes and challenges of the kingdom’s anti-terrorist operations during a meeting organized by the Foundation of Arabic Culture and the International Journalism Club last night.

Morocco has adopted a comprehensive strategy against terrorism, which runs in partnership with security forces, religious institutions and anti-poverty programs, El Khayam said to the academics and politicians that attended the event.

The official added that the collaboration that Morocco has developed within its own military and police sectors and with other countries has reaped its benefits by drawing from laws and other statues that support the country’s war on terror effectively.

The present danger from Syria and Iraq coincides with the build-up of local extremists who follow ISIS, the director said, highlighting that Morocco has disbanded 35 cells related to the deadly organization.

Out of the 155 cells El Khayam reported, around 50 had been working with groups in distressed regions, including Afghanistan and Pakistan, the war zone in the Levant and the Sahel, just south of Morocco.

Efforts by the kingdom’s forces have led to the arrest of 2885 terrorist suspects, 275 of whom were in the planning stages of their coming attack. Over 324 organized attacks have been aborted by these efforts and a large amount of weapons and hazardous chemicals have been confiscated in the process, the official said.

El Khayam’s office has also been tracking the deaths of Moroccan fighters in Iraq and Syria and has found that 1,579 of the kingdom’s citizens had died in the region: 758 have been waging jihad with ISIS, 100 others with the Islamic Movement for the Levant and 52 more with Jabhat Nasra, or the Nasra Front.

Some of the newest threats to Morocco come from the increased interaction between the separatist Polisario Front and terrorist groups in the Sahel as “hundreds” of the former’s fighters are part of the brigades of Al-Qaeda in the Maghreb (AQIM) and similar organizations.

The refugee camps in Tindouf present a source of “anxiety” for intelligence services, El Khayam said, because the camps harbor AQIM leaders. The jihadist presence necessitates the intervention of the international community to defuse the situation in the camps, he added.