Rabat - Following an impressive list of Moroccan world records for “largest” items, including the world’s largest Tajine and Tangia, largest omelet, largest couscous, largest flag, and largest piece of sugar, Moroccan company Sultan Tea’s teapot has made it into the Guinness book of world records. 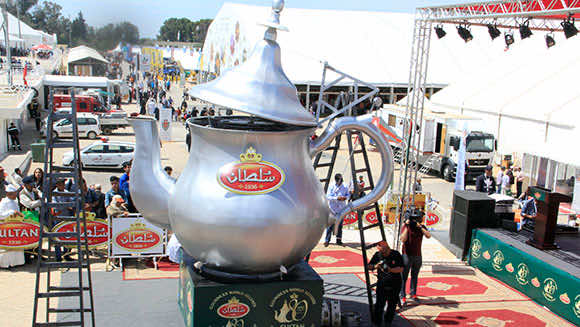 Rabat – Following an impressive list of Moroccan world records for “largest” items, including the world’s largest Tajine and Tangia, largest omelet, largest couscous, largest flag, and largest piece of sugar, Moroccan company Sultan Tea’s teapot has made it into the Guinness book of world records.

The Guinness World Records official site, which records ultimate record-breaking facts and achievements, announced on May 9 that a teapot designed and created by Sultan Tea is the largest teapot ever.

According to Guinness, the “family business Sultan Tea recently created the largest teapot ever, measuring a striking 4 m (13 ft 1 in) in height and 2.58 m (8 ft 5 in) in diameter.”

The super-sized teapot was unveiled at the 11th annual Moroccan International Agriculture Fair (SIAM 2016) which was held from April 26 to May 1 under the patronage of King Mohammed VI and focused on “Resilient and Sustainable Agriculture.”

The company decided to create the largest teapot ever to celebrate the brand’s 80th anniversary, given the symbolic importance of the teapot in the Moroccan culture.

The teapot, which sports a traditional Moroccan design, is “made of iron, weighing approximately 1,200 kg (2,465 lb).”

A group of expert cooks prepared tea in this huge teapot making “1,500 litres of tea with 3 kg of mint.”

Tea, locally called Attay, particularly with mint, is the most popular drink among Moroccan families and is perceived as the number one hot beverage consumed in the country.