Morocco World News
Home Culture Who is “She Who Tells a Story?”

Orlando - Artist Sari Khoury said, "Our responsibility as Arab artists in the international community lies in our ability to interpret our culture to the world," but what responsibilities does the Arab woman artist have to represent her own identity to the world? Is she the immigrant, the mother, or the righteous revolutionary; the wannabe pop idol or smokey-eyed Instagram goddess?

Orlando – Artist Sari Khoury said, “Our responsibility as Arab artists in the international community lies in our ability to interpret our culture to the world,” but what responsibilities does the Arab woman artist have to represent her own identity to the world? Is she the immigrant, the mother, or the righteous revolutionary; the wannabe pop idol or smokey-eyed Instagram goddess?

Proud, educated, and self-assured as she may be, the Arab woman still struggles for selfhood. The need to immerse herself in a cultural identity—a kind of overcompensation, some may say, from a Western upbringing—leaves her with a foot in each culture. She may find herself imbalanced, relying on a memory bank of images from the homeland–often feeling too Eastern for the West and too Western for the East. Topics of female identity, colonialism, warfare, occupation, and cultural devastation loom over her head.

That being said, Arab women are producing some of the most significant, influential artistic work in the world. Using a mixture of visual art forms, Middle Eastern and North African artists like Raeda Saadeh, Rula Halawani, Lalla Essaydi, Rana El Nemr, and Boushra Almutawakel—and countless others—are responding to these themes.

Born in Umm Al-Fahem, Saadeh lives and works in Jerusalem, and the woman she represents in her works lives in a never-ending state of occupation. She uses the objects, monuments, and barriers around her to create the aesthetic of limitations on her as a Palestinian and as a woman. Raeda Saadeh’s piece, “Who will make me real?” shows the artist lying in a reclining pose, covering herself with Palestinian newspapers in a cast-like fashion.

Rawiya, meaning “storyteller,” is a phrase that lends itself to a collective of women photographers from the Middle East and an exhibition titled She Who Tells a Story: Women Photographers from Iran and the Arab World. Given the oral and folkloric traditions many Persian and Arab contemporary artists still use in their works, the phrase allows women to tell their stories—whatever they may be.

Moroccan-born Lalla Essaydi’s Triptych, Bullets Revisited #3, is one of the exhibition’s featured works. Like Saadeh, she uses the image of a woman lying down, but Essaydi’s subject is surrounded with gold and silver bullet castings. The bullets serve the same purpose for Essaydi as Saadeh’s newspapers: reminders of violence and restrictions placed on women. Viewers cannot gaze at their beauty without feeling a sense of uneasiness.

Deconstructing these Orientalist stereotypes is not easy for these artists, as the image of the Arab or Iranian woman continues to perplex. To the world, these women are walking paradoxes; a contradiction of sensuality and censorship; victims of their brutish male relatives and the complacency of their female ones. And that is true for many of these women, but to pinpoint Arab women as the only women who are subjected to oppression denies us a voice and excuses the brutally patriarchal nature of other cultures who are not Arab and/or Muslim.

Inspired partly by Egyptian writer Nawal al Saadawi (who once told her audience in a lecture, “Women who wore the hijab or niqab were the same as women who wore makeup in the sense that they all hid their true identities”), Yemeni photographer Boushra Almutawakel confronts the stereotypes associated with veiled women. Recognizing her own mixed feelings and opinions of the veil, Almutawakel’s Hijab series includes pieces that show progressively veiled women in different frames and the Fulla, an often veiled Barbie-like doll that’s marketed to Middle Eastern countries. 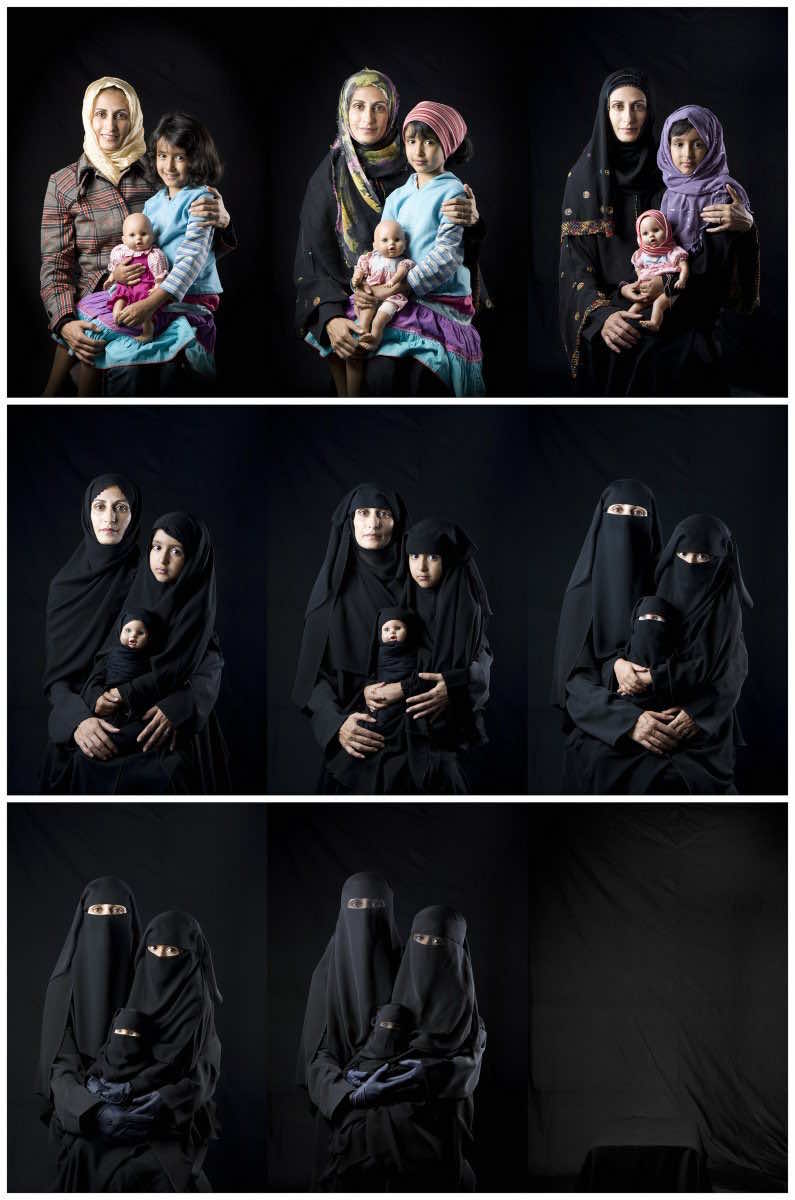 It isn’t at all surprising that the Arab woman cannot escape her inherently politicized identifiers. In today’s political climate, it’s almost impossible. The West views Arab women as the “Other,” whether that Other is a mysterious fantasy or terror-induced nightmare. And while it may be a key to tolerance and a deeper understanding of Arab and/or Muslim women as individuals, art shouldn’t be the only arena where Westerners can accomplish this.

In her book Casting Out: The Eviction of Muslims from Western Law and Politics, Sherene Razack states, “The body of a Muslim woman, a body fixed in the Western imaginary as confined, mutilated, and sometimes murdered in the name of culture, serves to reinforce the threat that the Muslim man is said to pose to the West, and is used to justify the extraordinary measures of violence and surveillance required to discipline him and Muslim communities.”

Thus Western man is the Muslim woman’s savior, depicting her body and her image. The summed up meaning of her very existence is in his art and his politics. The images and identities of these women are analyzed in all arenas; used to justify laws banning them from wearing headscarves and, as Razack notes, adding “fuel to the war on terror.”

To paraphrase late French-Moroccan photographer Laila Alaoui in an interview with The Guardian, radicalization rids Arabs of any identity, as “The Arab world is not just Islamic State.” If the radicalization of Muslim women can be tied to identity crises, then creative expression is a pathway to selfhood and self-definition. It’s the answer to the media’s misrepresentation of all Arabs and a call against extremism. Perhaps this is the key to Western understanding of the Islamic world: an Arab woman telling her own story, not as a victim, but as a complex, multiplicitious individual.