Rabat - At least 13 people were killed in an attack this morning by al-Shabab at the African Union (AU) base near the airport in Mogadishu. 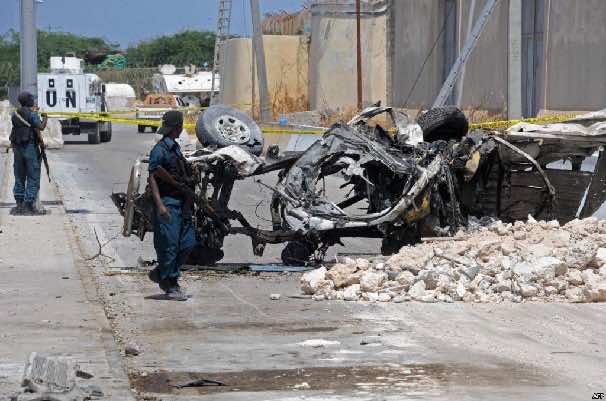 By
Bryn Miller
-
Bryn Miller is an rising sophomore at Claremont McKenna College majoring in International Relations and minoring in Arabic and Spanish.
Jul 26, 2016

Rabat – At least 13 people were killed in an attack this morning by al-Shabab at the African Union (AU) base near the airport in Mogadishu.

Two vehicles carrying explosives detonated near an entrance to the AU base and at a checkpoint close to the base staffed by Somali forces.

Al-Shabab’s spokesman told al-Jazeera that the terrorist organization had carried out the attack to kill “occupying” foreign forces.

In a press release  from AMISOM this afternoon, AU Special Representative for Somalia Francisco Caetano Madeira praised the quick response of Somali and AMISOM forces that “prevented the vehicles from proceeding further and thereby thwarted the attack.”

The African Union Mission in Somalia (AMISOM), established in 2007, aims to stabilize the country and combat al-Shabab. Authorized by the United Nations, the mission employs soldiers from across the African Union.

United Nations efforts to bring peace to Somalia have been largely unsuccessful  since the 1990s. AMISOM has faced considerable obstacles and incurred large numbers of casualties while attempting to stabilize the country.

This attack follows two other deadly attacks by al-Shabab in Somalia this summer alone.

AMISOM condemned the bombing on Twitter this morning as a “senseless attack that aims to disrupt and cripple the lives of ordinary Somalis. These attacks must be stopped.”