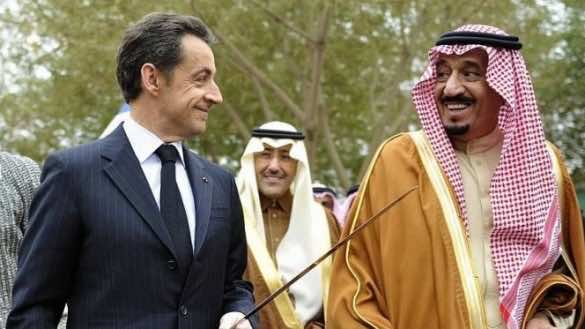 Le Pen took aim at the former president of France for “secretly” visiting Saudi King Salman Abdul-Aziz al Saud, who was on a personal vacation in Tangier.

“The journal ‘Marianne’ reveals that in early August, Nicolas Sarkozy traveled to Morocco to secretly meet the president of Saudi Arabia to ensure their kind friendship,” Marine Le Pen stated in front of her supporters.

The leader of FN also pointed out the discrepancy between the image that Sarkozy has promoted in his election campaigns, and the alliances he established under wraps with “promoters” of extremism.

“Clearly, Nicolas Sarkozy, who wants to be the media champion of fighting Islamic radicalism, paid allegiance to the global promoter of Wahhabism. That is, the doctrine adopted by the most obscurantists, most radicals, and organizers of the worst provocations.”

Marine Le Pen continued her attempt to discredit Sarkozy: “How can we believe that the French would rely in their fight against Islamism on a political figure that submits to the Qataris or the Saudis?”

Nicolas Sarkozy is known for his anti-Islam stance, and has been accused of demonizing Islam to gain public support in France.

During the recent burkini controversy in France, Sarkozy expressed his utter opposition of the beachwear, saying that the Muslim communities force women to wear it. Amnesty International later dismissed this argument as “based on impressions and not proof.”