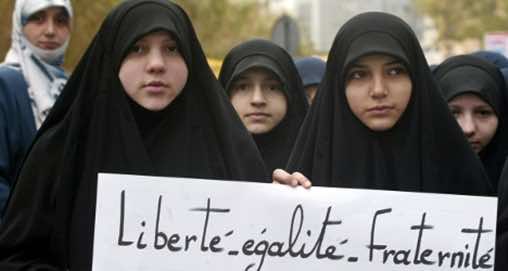 London- Despite growing Islamophobic incidents, alongside the French governments policies against the niqab, Islamic conservatism still finds ground in France

A survey published recently has shown that more than a quarter of French Muslims are in favour of a more conservative from of Islam.  Of the 1,029 people surveyed, a majority who supported this branch of the faith were under the age of 25.

Carried out by liberal think tank Insitut Montaigne, the survey showed that 24% of people who supported an ultra-conservative Islam were also supportive of the niqab (face veil), which has been banned in the secular state since 2010. Furthermore, the survey revealed that women were in more favor of the niqab in comparison to men, helping to debunk myths that men enforce it upon women as an oppressive move. Only around 18% of women reject niqabs against 26% of men.

The survey further revealed that around 60% of participants believed that girls should be allowed to wear hijabs (headscarves) to schools. Published exclusively by Le Journal du Dimanche (LJD), it appears that Muslims in France are increasingly becoming disillusioned with the laws that came into practice 12 years ago, forbidding religious symbols in classrooms.

It appeared from the results of the survey that Muslim women tend to hold more conservative views than men. For example, 56% of women said they would attend a mixed swimming pool, in comparison to 75% men. 85% of Muslim women agreed to be treated by a doctor of the opposite sex in comparison to 97% men.

The report also revealed that some Muslims, whilst stating their faith as an important part of their identity, rarely attended mosques, with only 29% attending on a weekly basis.

Researchers further divided French Muslims into 3 categories: ‘secular’ which stood at 46%, ‘proudly Muslim’ at 25% and then ‘the ultras’ at 28%. Those who identified as proudly Muslim favored a greater role of religion in the workplace, but were opposed to things such as the burqa and polygamy. The ultras appeared to be the younger of those surveyed, living on the fringes of society. What this shows is that there is a correlation between conservatism and the class system, those who have been failed by the state and feel disenfranchised by the lack of social mobility are more susceptible to religious conservatism.

France has the biggest population of Muslims living in Western Europe, but such a presence has not been without opposition. After terrorist attacks during the summer, tensions have been running high in the state and have seen a rise in right-wing party support.