London - African nations are seeking ways to adapt their agriculture to the rising challenges of climate ahead of the COP22 Conference, scheduled to take place in Marrakech on 7-18 November 2016. 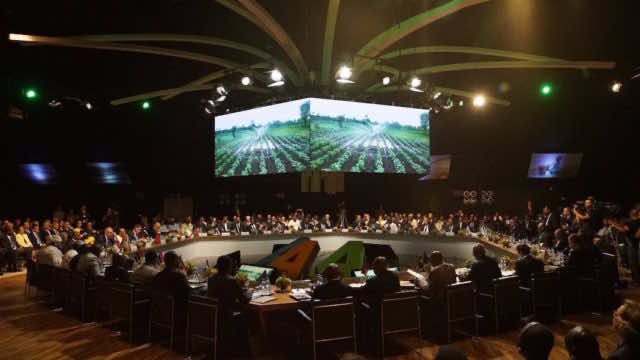 London – African nations are seeking ways to adapt their agriculture to the rising challenges of climate ahead of the COP22 Conference, scheduled to take place in Marrakech on 7-18 November 2016.

Around 20 African ministers, alongside representatives from various international institutions, as well as scientists and experts, gathered in Marrakech on September 29th and 30th, to attend a High Level meeting ahead of the upcoming COP22 negotiations.

The main purpose of the meeting was to formulate a committee for the initiative for the Adaptation of African Agriculture (AAA) to climate change. Nearly all African states were represented, including the host nation.

Recognising that various changes are needed in terms of African agriculture, the Ministers of Agriculture, as well as Heads of Delegations, amongst other participants have committed developed countries to mobilising at least 100 billion US dollars per year to developing countries, in terms of agricultural aid.

The initiative was launched in April 2016, with Morocco taking the lead. African states found that Africa, Agriculture and Adaptation were not major features in international negotiations and therefore this initiative was born in order to change this.

Participants recognised the vulnerability of Africa’s agriculture, in the face of climate change and global warming. The meeting acknowledged that various African states have insufficient funds in order to adapt their agricultural methods in order to sustain productivity.

Overall, Africa only benefits from 5% of climate funds with adaptation projects capturing 20% of climate funds. In order to reduce emissions in the long term, productivity in the agricultural sector is imperative, hence its development at COP22.

The meeting further built upon the COP21 pledges, committing states to strengthen the global response to the threat of climate change, as stated within the United Nations Framework of Climate Change.

The meeting of high-level attendees acknowledged the pre-existing challenges facing Africa, from food security, poverty and water scarcity and also discussed means to eradicate such problems in the continent.

The meeting’s agenda also covered the commitments made by African countries at the High-Level Conference of Dakar in October 2015, to redefine the roadmap for the agricultural transformation of Africa, as well as the pledges made at the Regional Conference for Africa organised in April 2016, in Abidjan, calling for resilient agricultural development in the continent.

The meeting also witnessed the launch of the #weareAAA campaign. This campaign will look to gather public support for the initiative before the upcoming COP22 gathering.

The AAA itself has been structured into two sections:

1 – Putting agriculture at the centre of climate negotiations and to support the notion of a higher, more efficient and more effective climate funding for the African agriculture;

2 – To contribute to the Global Climate Action Agenda by emphasising the adaptation projects and sound agricultural practices in the continent.

The meeting concluded in support of the initiative in favour of the Adaptation of African Agriculture declaring:

1 – To support the principle of a higher, more efficient and more effective climate funding, both in private and public spheres.

2 – To contribute to the action and solutions in the Global Climate Action Agenda by emphasising various projects and practice in Africa.

4 – To work to reinforce African capacities, in terms of programs and policies and manage climate-resilient sustainable projects.

The initiative is a great example of the growing south-south relations and the call for greater cooperation between African states, which is a priority for King Mohammed VI.

The AAA initiative will direct efforts to also raising public awareness and mobilising the international community to support the campaign in the lead up to COP22, which will be held in Marrakech from November 7th-18th.

COP22 will see state leaders gather together to discuss the most pressing climate concerns and challenges facing the globe. As a follow up from last year’s COP21 in France, COP22 is set to reinforce pledges made during the Paris Agreement.