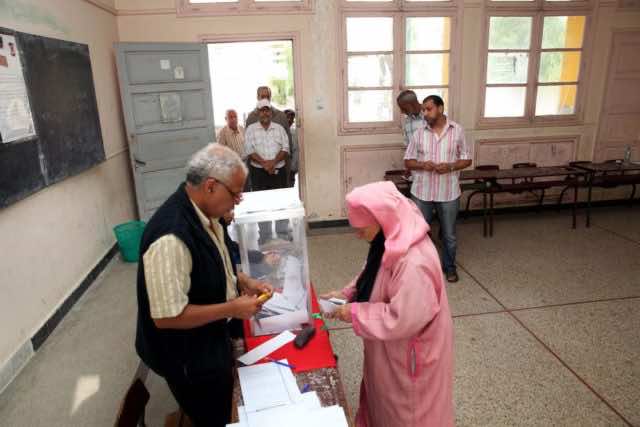 Over the past few days, small shops all over Morocco have been plastered with party propaganda and voting information. Young men and women distributed flyers to passers-by and it was rare for a single night to pass before at least one party rally took place in a public area.

There are three parties that have garnered the most attention this election cycle. They are led by Abdelilah Benkirane, Ilyas Ei-Omari, and Nabila Mounib.

As sitting head of government, Benkirane has defended the accomplishments of his lapsed five-year term as small, but hard-won. His Islamist Justice and Development Party (PJD) has prided itself on running a clean campaign.

When Benkirane visited Moaadh Benjalaal Grade School in Rabat to cast his vote on Friday, he said he ran an “integrity-filled” campaign and awaited election results the next day.

This year’s economic slowdown – caused by a failed harvest due to nearly absent rainfall – has caused the populace’s financial discomfort to increase, especially because the agricultural sector employs 40 percent of the Moroccan workforce.

Food prices across the country have regained stability since the initial shock earlier this year. The heightened price of onions – a staple in Moroccan cooking – invited significant attention from the local media before the holy month of Ramadan began in the summer.

Benkirane’s main rival, El-Omari from the Authencity and Modernity Party (PAM), has focused on campaigning in rural regions in his “Deep Morocco” tour over the past week in light of brewing economic frustrations in the area.

El-Omari has argued that Benkirane does not deserve a second term because his administration has failed to achieve the goals he laid out in his campaign five years ago. The PAM leader has also cast suspicion over his rival’s handling of loans from the International Monetary Fund and other lenders.

Mounib, who hails from the leftist United Socialist Party (PSU), is a new face on the ballot because the PSU boycotted the 2011 legislative elections, acting on concerns that the constitution did not go far enough to enshrine democratic values in Morocco.

“It did not outline a clear separation of powers, it did not truly stipulate the characteristics of the parliamentary monarchy, and it did not link responsibility to accountability,” Mounib said of the constitution to CNN on September 30th.

Mounib, who also holds an endocrinology professorship at the University of Hassan II in Casablanca, gained popularity late last year, when she headed a delegation to Stockholm that convinced the Swedish parliament to abandon plans to recognize the Polisario-led Sahrawi Arab Democratic Republic.

Several international observers have been invited to monitor the elections by the National Council for Human Rights.

One such mission will come from the Public Diplomacy Council of Catalonia (Diplocat).

The aim of the initiative is “to promote the strengthening of democracy and the respect for the effective exercise of a series of rights, including the right to freedom of expression, the right to vote and other civil rights” and “to back democratization processes in nearby countries such as Morocco,” according to Albert Royo, Diplocat Secretary-General.

The Virginia-based International Foundation for Electoral Systems (IFES) and the Washington D.C.-based National Democratic Institute (NDI) will also be observing the election’s proceedings.