Washington D.C. - The Moroccan American Network’s Second International Media Forum presented a star studded  program of top journalists, academics, experts, and others from both sides of the Atlantic on September 27 at the National Press Club and September 28 at the American University’s Washington College of Law, in Washington, D.C. 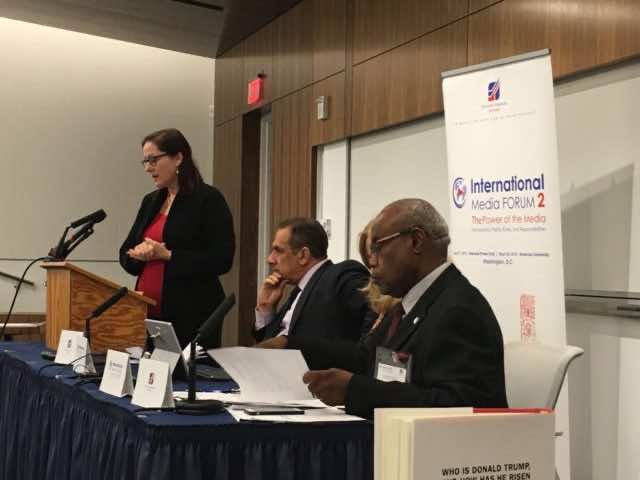 Washington D.C. – The Moroccan American Network’s Second International Media Forum presented a star studded  program of top journalists, academics, experts, and others from both sides of the Atlantic on September 27 at the National Press Club and September 28 at the American University’s Washington College of Law, in Washington, D.C.

The forum, open to the public, addressed and raised awareness about some of the most important issues facing Morocco, the US, and the world:  the power, role and responsibilities of the media; national security; racism; bias; Islamophobia; truth in reporting; changing technologies; ethics and accuracy in journalism; freedom of speech; freedom of expression; and principles of democracy.

Day 1 kicked off with a keynote by Mamadou Samba, Director of the Office of African Affairs in the Executive Office of the D.C. Mayor. Samba, representing Mayor Muriel Bowser, recognized the importance of the conference with respect to the current elections and acknowledged its relevance to D.C.’s 202Creates program, an innovative initiative to promote use of new media and social media to create business opportunities in the “creative capital” of D.C.  in introducing Samba, Elisabeth Myers, an attorney and principal organizer of the forum, expressed the Moroccan American Network’s appreciation to the D.C. Office of Cable TV, Film, and Entertainment for its financial support for the program.

The Changing Face of Media

The first panel addressed the Changing Face of Media, innovations in technology that are changing the face of journalism and the way people do business. Moderated by Dr. Ali Ziyati, a professor at West Virginia State University, the panel featured Shara Gibson, Manager of Strategic Partnerships for the D.C. Government’s Small and Local Business Development Office, Bruce Fryer, Director of Media Relations for Sanitas International, and renowned veteran Moroccan-American journalist Mohamed Dourrachad, the CEO of 50 Frames TV Productions in Washington D.C.  Dourrachad received the Moroccan American Network’s award for Excellence in Journalism.

The second panel, ably moderated by Dr. Fatima Hadji, an expert on international development and democracy, featured six Moroccan and American speakers from both sides of the Atlantic:

Dahan set the stage and addressed the historical background of King Mohamed’s reforms beginning in 1999 to family law and human rights and to “make human rights culture a cornerstone of Morocco’s democratic tradition.”

Meknassi addressed the image of women in media in the context of the Morocco’s upcoming October 7 elections.  Idrissi addressed some of the difficulties faced by Moroccan’s outside Morocco in participating in the Moroccan elections.

Khayat discussed the use of media by political parties to promote their image.  She remarked that “when conventional media fails, social media speaks.” She also stated that freedom of expression is expanding in Morocco.  “Even though the current press code has some shortcomings, it is bringing more freedom to the pursuit of journalism. Morocco is challenged by security and social issues, but it is still working toward establishing democracy and leaving behind the old practices.”

Tijjini, well known for speaking his mind on his talk show in Arabic and speaking for the first time here in English, discussed media coverage in the electoral process.

Gary Flowers, calling himself “an honorary Moroccan and a brother from another mother” to Mohamed El Hajjam, President of the Moroccan American Network and organizer of the Forum, addressed the power of the media in galvanizing public opinion to force civil rights reforms. He said he sees “a nexus” between Morocco and Black American history, suggested that there might be “some lessons we’ve learned in this country as Black Americans that could be useful going forward for the kingdom [of Morocco].”

Flowers described the torture and murder in 1955 in Mississippi of a 14-year old African-American boy, Emmett Till, by a gang of men for reportedly flirting with a white woman.  His body was dumped in a river and when it was later discovered and sent home to Chicago for burial, Flowers said, “It was the media that showed his deformed body in an open casket that then affected the 1960 election when John Kennedy was elected President.” He offered two other equally poignant examples of media influencing public opinion and the course of history, how images shown by journalists such as Walter Kronkite were able to “open the hearts and minds” of those who had not yet joined the Civil Rights Movement in the U.S. He noted also, much more recently, in places like Ferguson, how “citizen journalists,” with their cell phone cameras have had a rejuvenating effect on the African-American civil rights movement.

On the Media and National Security panel, Former Congressman Albert Wynn spoke on U.S. national security concerns. Think tank expert David Pollock from the Washington Institute, and Christopher Harvin, Founder of Sanitas International, who served the White House and held senior advisory positions with the Office of the Secretary and Deputy Secretary of Defense, the Secretary of Veterans Affairs, and members of Congress.  Charles Kestenbaum, President of BK International and Vice President of the Middle East and North Africa Consultants Association, addressed cyber security concerns.

Awards for Excellence in Journalism

Throughout the day, the Moroccan American Network recognized excellence in journalism.  MAN honored several Moroccan journalists with awards, presented the award for Strategic Partner 2016 to Christopher Harvin, and presented tokens of appreciation to others.

According to MAN President and CEO of AV Actions Inc. Mohamed El Hajjam, “With this conference we wanted to inspire Moroccan-American strategic alliances by bringing journalists from all forms of media together.  We brought over Moroccan journalists such as Yasmine Khayat, Mohammed Tijjini, and Abdelouahid Mahir to meet with the U.S. media. We were pleased to honor them with awards for their excellence in journalism, along with my mentor, Mohamed Dourrachad, and Mohamed El Alami of Al Jazeera.”

Undoubtedly, the highlight of Day 1 was MAN’s presentation of the Moroccan flag to the National Press Club as a gift to be exhibited in the Club’s foyer with flags from many other countries around the world that champion free speech and protections for journalists.

Minorities, Media, and the US Presidential Election 2016

Moderator Elisabeth Myers, a lawyer and Adjunct Associate Law Professor at the American University’s Washington College of Law, called the forum “one of the most timely and important conferences of the year” when both Morocco and the U.S. are in the middle of highly contentious elections and the media is being both used and abused by the campaigns.

John Watson, Associate Professor and Director of Journalism at American University’s School of Communication, moderated the last panel that addressed the role and responsibilities of the media and the potential perils and pitfalls.

Along with reporter David Cay Johnston, the panel included Dr. Mohamed Chtatou, a professor at ILCS Rabat, and also an invited participant in the White House’s Interfaith Dialogue that occurred the week before, and Moroccan journalist Yasmine Khayat.

Addressing the roles and responsibilities of journalists in today’s world, Johnston pointed out that journalists are the “only people paid to tell the truth.”  While other occupations, such as doctors, he said, require people to tell the truth, “that’s not their mission.”

Khayat added that the rhetoric around the media is incredibly important in making the audience understand the truth. “You have to educate people,” she said.  She called for training in journalistic standards, decrying the faux journalists who “don’t even know the 5 Ws of journalism.”  With the rise of social media, “anyone can become a ‘journalist,” she said. Citing Morocco World News, whose fifth anniversary the Forum was also celebrating, she explained that although this news source might not be as “popular” as other media outlets in terms of ratings and revenues, she said MWN is employing “real journalism,” not just “spreading gossip” or engaging in sensationalism.

When the conversation shifted to images of Islam in American media, Dr. Chtatou emphasized that while Morocco is an ally of the U.S., much of the American media generalizes about the country, extrapolating only from its most extreme moments. He said when people living in the West ask him, “Are you a Muslim?” and he says “yes,” he must then “prove” three additional things:  that he is not an Islamist, not an extremist, and not violent.  From such a Westerner’s perspective, Dr. Chtatou continued, “to be a Muslim entails lots of things that are not true.”

Professor Watson noted that “Journalists are not historians.”  Rather, journalists give the audience a “smaller view of the bigger picture.” Journalism can never be free of bias, he said, because journalists are only human.  Instead, reporting must reflect the “broadest possible bias.” He said that his responsibility is to teach his journalism students that “the role of journalism is to provide people with reliable information in order to make an informed decision.”

Elisabeth Myers, a lawyer and law professor at the American University’s Washington College of Law, called this forum “one of the most timely and important conferences of the year” when both Morocco and the U.S. are in the middle of highly contentious elections.

“We brought together the top journalists to engage in a cross-cultural debate about what is the essence of journalism. It highlighted the importance of both ethics and integrity in journalism in Morocco and the U.S., and explored the power of the media in an election year,” she said. “The conference also highlighted the importance of participation in the democratic electoral processes to combat injustices and problems in society, such as racism and Islamophobia.”

Myers expressed her appreciation to the two main sponsors, DC Office of Cable TV Film and Entertainment and the Day Law Firm, for making the conference possible.  “With support from our sponsors, strategic partners, and a group of exceptional volunteers, we have succeeded in generating an important debate that will ripple across two continents.”

Johnston, whose latest book, “The Making of Donald Trump” is a poignant exposé of 30 years of fraud and abuse by the Republican Presidential candidate, signed copies of his fourth book that was released in August.

Next Steps for the Moroccan American Network

When asked what is on the horizon for the Moroccan American Network, El Hajjam said that MAN is working on establishing relationships with universities and other potential partners such as the National Press Club to be able to expand next year’s international media forum to other countries in the MENA region. While this year’s forum focused mainly on Morocco, branding it as a country that is implementing reforms and making advances in civil rights such as freedom of speech and freedom of the press, next year’s Third International Media Forum will provide an opportunity to honor other countries in the region that are making remarkable progress in the areas of business opportunities and social media, and broaden the scope of the forum to these areas.

MAN’s next event will be a Moroccan Cultural Heritage Celebration to be held on October 22, 2016, as part of the Alexandria International Festival, at the Waterfront Park in Alexandria, Virginia.  More information is available at http://www.arabamerica.com/events/annual-alexandria-international-festival/.

MAN is also planning its CEO Summit for next year.