Casablanca - The heartbreaking scene of Mohcine Fikri crushed inside of a garbage truck compactor has spread across the globe and shocked not only Moroccans themselves, but the world at large. 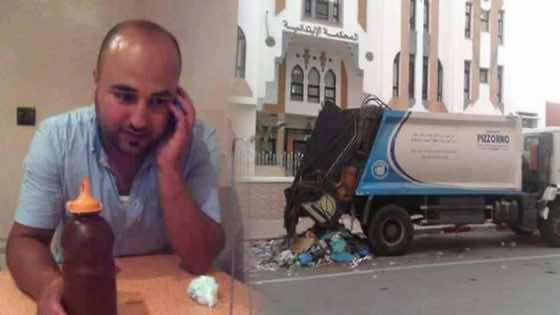 Casablanca – The heartbreaking scene of Mohcine Fikri crushed inside of a garbage truck compactor has spread across the globe and shocked not only Moroccans themselves, but the world at large.

A young man, merely attempting to save the merchandise which represented his livelihood, into which he had invested his life’s blood and sweat was crushed with it in the most despicable way. The unimaginable scene has caused indignation and outrage, and shaken the very ground under which the apparatus charged with the supposed protection of the people operates.

As a direct result of the massive social media campaign, created in reaction to the incident, including the string of public protests that followed, Mouhcine Fikri has become the epitome of the Moroccan citizen who literally sacrifices his life to provide for his family in a troubled economy. Uprisings in the virtual and real worlds also rightly regard the victim as a result of the looming specter that is the abuse of power that has persisted, despite attempted reforms and the adoption of a new constitution in 2011.

On a personal note, amid the feeling of indignation that paralyzed me, and the chaos that the virtual world of Facebook opened on reality, dubious inconsistencies stood in way of my natural propensity to revolt against injustice. The video recording the incident, which went instantly viral, suggested that a police offer ordered the crushing of the victim in the truck compactor, saying “crush his mother” (which became the predominant hashtag unifying denunciatory posts). Until it can be proven, however, it may turn out to be nothing more than the sort of exaggeration that inescapably permeates the news, continuing to spread from word to mouth.

The video shows the victim, along with others, protesting against the confiscation of his merchandise by throwing themselves in the garbage truck compactor. Suddenly the compactor begins to run while the four protesters are still inside. Three of them managed to escape while the fourth, Mouhcine Fikri, was crushed. Therefore, if the policeman’s quote is accurate, he would have been heard giving the order to crush “them” and not “him” unless he knew that the other three would escape, which is a flagrant defiance of reason.

With this in mind, I put a great deal of effort in trying to keep an analytical distance from the information I come across. At this moment, people began sharing videos and photos recording riots in the city of Hoceima in 2011. It is understandable, one would argue, that this immense fury has pushed people to share them without verification. However, questions about the sources of these posts invaded my thoughts. Later, photos of the flags of the separatists in the north gave proof of the existence of a political manipulation that placed a lot of focus on the fact that killing of Mouhcine Fikri was deliberate.

Playing into the hands of conflict promoters and political inciters is potentially quite dangerous and could reverse the effects of the uprisings. It would be enough, and perhaps more productive, to circulate a video on Facebook showing an expert explaining that the button that runs the compactor is in the back, away from where the police officer and civil servants stood and close to the protestors.  It could possibly not only calm the masses down over this particular tragedy, but also quell the demands calling for the dignity of the citizens and denouncing the authorities’ abuse of power.

The dignity of Moyhcine Fikri should be the focus of all Moroccans participating in these peaceful protests. Circulating inaccurate information with a questionable agenda at its core, does not serve the dignity of Fikri or the Moroccan people

An eyewitness who provided testimony of the event said the following, “… someone must have pushed the button by mistake” and that “It is inconceivable that the driver or his assistant could have pushed the button because they know the repercussion of such action.” He continued to articulate, in simple terms, the real manifestations of the injustice that the victim suffered:

The police, he explained, know all about the illegal fish trade but have done nothing to stop everyone from indulging in it. In addition, instead of confiscating his merchandise in such provocative way, “… the police should have handcuffed him, taken him to the police station and taken the ordinary procedure against him.”

Mohamed Maarouf, a Moroccan intelletcual and professor at Chouaib Doukkali University in El Jadida put his hand on the real issue when he asked:

“How could the public authorities dare to destroy a huge amount of Swordfish when Moroccans consume only sardines? Why was the merchandise not confiscated legally and taken to charities? Or is it the settling of accounts between corrupt people that claimed the life of the fishmonger?”

This is the form of abuse of power that Moroccans should invest time and effort in combating. We should denounce the selective, discriminatory application of law and call for the fair and transparent implementation of legal procedures rather than personal, amateurish, and provocative way of exercising revenge on powerless citizens.

We should demand a thorough investigation that is supervised by a committee made up of public representatives to ensure transparency. We should also call for punishing everyone and anyone responsible for this tragic death, from police officers to the officials that run the illegal fish trade. Certainly, if we are not able to transcend the specifics of this sad incident, we will watch helplessly as all these demands will go to the dogs.