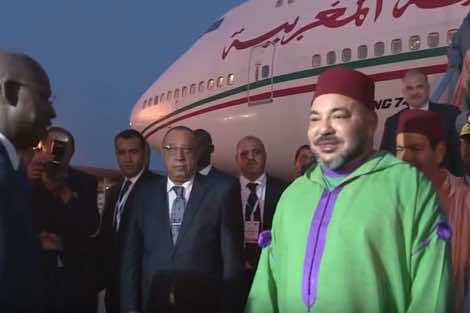 The monarch spent a brief period of time in Marrakech to attend the COP22 and preside over the African Summit that was part of the climate change conference and attended by many African heads of state.

King Mohammed VI is now on his way to completing his tour of the continent, beginning with Ethiopia and then onto Madagascar, where the International Francophone Organization Summit is set to take place on November 26 and 27.

Ethiopia is an important destination for the Moroccan monarch as the next African Union summit is expected to take place in the East African country.

In recent months, the Moroccan government has been vocal in its desire to reintegrate the African Union. It left the union in 1984 after the organization recognized the self-proclaimed Sarahawi Arab Democratic Republic.

During the 27th summit of the African Union held in Kigali, Rwanda, last July, King Mohammed VI announced Morocco’s intention to join the African Union once again. “Morocco firmly believes in the wisdom of the AU and its ability to restore legality and correct mistakes along the way,” he sent in in a letter sent to the AU summit.

By now, all member countries of the African Union have received King Mohammed VI’s request.

King Mohammed VI’s trip to Ethiopia is off to a good start following the announcement that the Moroccan OCP is planning a joint venture with the Ethiopian government for the construction of a $2.5 billion fertilizer plant.

During his East African tour in October, the Moroccan sovereign has been able to finalize a number of mutually beneficial economic agreements with other Rwanda and Tanzania. The strengthening of these relationships is sure to have an impact on Morocco’s potential reintegration into the African Union.