Rabat - Australian Minister of Foreign Affairs Julie Bishop announced on Wednesday in Marrakech her country’s decision to open an embassy in Morocco to further strengthen bilateral relations between the two nations.

Rabat – Australian Minister of Foreign Affairs Julie Bishop announced on Wednesday in Marrakech her country’s decision to open an embassy in Morocco to further strengthen bilateral relations between the two nations.

In a meeting in Marrakech with Salaheddine Mezouar, President of the UN Conference of Climate Change COP22, Julie Bishop stated that Australia has made the decision to open an embassy in Morocco’s capital.

“We hope the opening of the embassy will usher in a new era in Australian-Moroccan relations,” said the Australian Minister, adding that Australia is hopeful that this step will represent an opportunity to increase bilateral relations, especially in terms of renewable energy.

Bishop went on to say that 30,000 Australian tourists visit Marrakech every year. She added that this number will continue to grow since Morocco “has stood out as a model of tolerance and stability.”

Australia’s Department of Foreign Affairs released a statement the same day announcing the decision to open its embassy in Morocco.

“Australia’s Minister for Foreign Affairs, the Hon Julie Bishop MP, has announced the Government’s intention to open an Australian Embassy in Rabat, Morocco, with the agreement from the Moroccan Government, as part of our commitment to expanding Australia’s diplomatic network,” said the communiqué.

“An embassy in Morocco is an important addition to Australia’s diplomatic network in Africa, a region of considerable commercial interest to Australia,” it added. 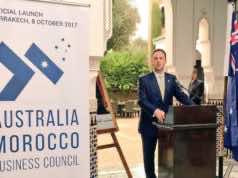