Rabat - In Morocco, teachers are mobilizing against a textbook judging philosophy "contrary to Islam." 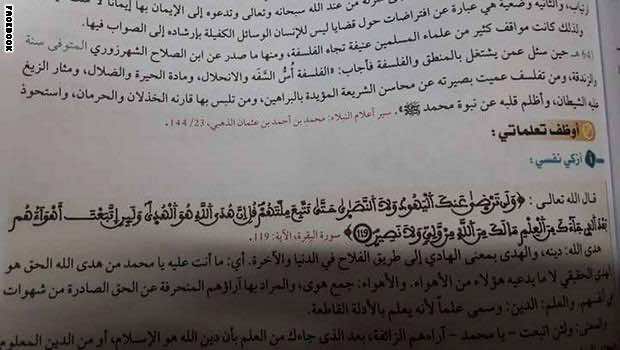 By
Chaima Lahsini
-
Chaima Lahsini is freelance journalist and activist with the Al-Fam collective in Rabat.
Jan 4, 2017
Spread the love

Rabat – In Morocco, teachers are mobilizing against a textbook judging philosophy “contrary to Islam.”

In the Moroccan kingdom, where Islam is taught in schools like any other subject, Moroccan authorities face the same challenge educators are challenged by all over the world nowadays: how to counter the rise of fundamentalist Islamism?

From December 21-23, Moroccan professors of philosophy demonstrated against the new textbooks of Islamic Education. The cause of the uproar can be found in the chapters of a textbook, Manar at Tarbia al Islamiya, which designates philosophy as “a production of human thought contrary to Islam” and “the essence of degeneration,” statements which aroused great emotion and concern among professors of philosophy.

The textbook, which was intended for students in the first year of the baccalaureate, was revised and reissued at the end of October 2016, in accordance with a reform promoted in February by King Mohammed VI, who had promised to promote a “tolerant Islam.” This reformed version was to have purged of references to violence or intolerance and enriched with concepts advocating respect for human rights.

These same philosophy professors are now mobilizing against the manual they deem to be “defamatory,” which seems to be inspired by a great figure of the thirteenth century, Ibnou As-Salah Ach Chahrazouri, a personality much appreciated by salafists, reports the Moroccan newspaper, L’Economist. This rigorous thinker believed that philosophy provoked “anguish and wandering, heresy and disbelief”. His diagnosis: philosophy is “the pinnacle of dementia and depravity.”

In an interview with Media24, Fouad Chafiki, curricula director for the Ministry of Education, responds on the use of this controversial quote. He explains that Ibnu Salah Al Chahrazouri’s quotation is underlined as being a “violent position of some scholars” in the textbooks. The use of such controversial discourse was intended to incite students to reflect, but taken out of context, it would refer to the opposite defended values.  Teachers were also given firm instructions to openly discuss this part of the course with their students.

Mr Chafiki also shed more light on how the revision of the textbooks occurred: “Two teams composed of a panel of experts and pedagogues were responsible for preparing two versions of the manual. In the first one, which was not accepted, it was clearly stated that philosophy is one of several ways to reach ‘The Truth.’ In the second version, which is currently being adopted, there is a quotation from Ibn Taymiyya which says that there is no contradiction between the religion of reason and the religion of transmission. Quoting Ibn Taymiyya, known for his doctrine favorable to fundamentalist Islam, has also not gone unnoticed. Fouad Chafiqi nuances however: “The quotation that has been retained, is an apology of the acceptance of reason in religion.”

The curricula director insisted later on that the purpose of revising the Islamic Education curriculum is to redact the textbooks containing any passage that promotes hate speech in favour of advocating tolerance and open mindedness.

On the bright side, the loud voices rising against the perpetuation of such grave statements proves that in Morocco, in spite of some conservative and regressive influences, there are always those who are ready to stand tall in the face of ignorance and intolerance.