New York - Portuguese diplomat Antonio Guterres has been officially inaugurated as the United Nations Secretary-General. From the start, Guterres will have to address many pressing issues, chief of which are the conflicts in Syria and Yemen, the worrisome spread of terrorism, the crisis of refugees in Europe, the Israeli-Palestinian conflict, the reform of the United Nations, and disputes of minor intensity such as the Western Sahara. 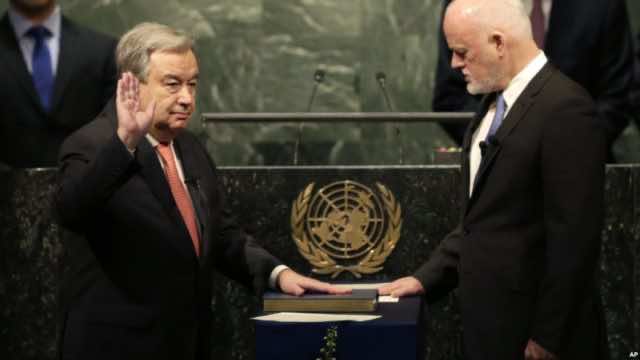 New York – Portuguese diplomat Antonio Guterres has been officially inaugurated as the United Nations Secretary-General. From the start, Guterres will have to address many pressing issues, chief of which are the conflicts in Syria and Yemen, the worrisome spread of terrorism, the crisis of refugees in Europe, the Israeli-Palestinian conflict, the reform of the United Nations, and disputes of minor intensity such as the Western Sahara.

However, among all these issues, most pressing is the massive influx of refugees to Europe. While Mr. Guterres’ predecessor Ban Ki-moon achieved little progress in this regard, one can hope that the Portuguese diplomat’s presence at the helm of the UN will bring good news for refugees. When Guterres was UN High Commissioner for Refugees, one of his greatest struggles was to fight for the rights of refugees and migrants.

From the beginning of the Syrian crisis, Guterres sounded the alarm about the worsening situation of Syrian refugees in host countries such as Lebanon, Jordan, and Turkey. He repeatedly urged the European Union and the United States to help these countries cope with the increasing flow of refugees.

In addition, Guterres repeatedly said that the Syrian and Iraqi refugees would eventually take the road to Europe if the EU did not provide financial aid to Syria’s neighboring countries, and was vocal in calling on rich countries to welcome more refugees.

Upon his inauguration as UN Secretary General, the refugee crisis will be among his top priorities. As a European, he will presumably renew his calls on the European Union and the United States to treat the issue of Syrian refugees humanely and in compliance with international law.

Guterres’ legacy at the UNHCR shows he is a good peacemaker

Guterres left an honorable legacy as head of UNHCR. During his tenure, he improved its performance and ability to respond in a timely manner to crises around the world. For example, he reduced UNHCR staff based in Geneva by one-third. This reform has improved the UNHCR’s capacity to deal with international conflicts through the deployment of more staff in crisis areas. Guterres became the champion of refugees and migrants around the world.

He is also known for his stances against racism and Islamophobia. Following the Paris and Beirut attacks in November 2015, he said it was “senseless” to accuse refugees of being involved in acts of terrorism. He has often said that it is not the refugees who cause terrorism, but rather tyranny, wars, and terrorism that create refugees.

Based on his legacy at the UNHCR, Guterres is in a better position to introduce necessary reforms to the United Nations, both in terms of its administrative structure and mode of operation, and its role in maintaining peace and international security. After the failures of Ban Ki-moon, one of Guterres’ first missions will be to reform the Department of Peacekeeping Operations and make it more responsive to the new global challenges.

In the same vein, Guterres should breathe new life into the efforts of more than two decades to reform the Security Council in such a way that it reflects the new balance of power at the international level and today’s geopolitical realities. Guterres will also have the difficult task of restoring the image of the United Nations in international public opinion.

During Ban Ki-moon’s tenure, international public opinion, especially in the Arab world, has grown tired of seeing the UN chief repeatedly express “his concern” over the conflicts that break out in different parts of the world without providing viable solutions.

There is a significant difference between the two men, whether in terms of form or background and their diplomatic career. Unlike Ban Ki-moon, who was regarded as lacking charisma, Guterres is a charismatic personality that is respected throughout the world. From a managerial point of view, the experience he has acquired during his ten years as head of UNHCR, as well as head of the Portuguese government qualifies him to do a better job than Ban Ki-moon. Many observers believe his experience at the head of UNHCR and as head of the Portuguese government give him the aura and respectability that Ban Ki-moon lacked.

Concerning the Western Sahara, the appointment of Mr. Guterres is good news for the parties to the conflict and is likely to breathe new life into the process and restore trust between the UN Secretariat and Morocco. Guterres had a cordial relationship with Morocco during his tenure as head of UNHCR. Ever since Cooperation between the two sides is stronger than ever before.

Moreover, what makes Gutteres even more qualified to better manage the conflict and create a positive dynamic is his deep knowledge of it. Gutteres is familiar with the issue, firstly because of the geographical proximity between Morocco and Portugal, and above all because of his status as Prime Minister of Portugal from 1995 to 2002. Mr. Gutteres was at the head of the Portuguese government when negotiations between Morocco and the Polisario entered a new phase in 1997 under the leadership of James Baker, the Special Envoy of the Secretary-General in the Sahara between 1997 and 2004.

The international stature of Guterres and his diplomatic experience will command the respect and consideration of the leaders of influential countries. Guterres will be in a better position to give fresh impetus to the UN political process aimed at finding a political solution to the Sahara conflict.

On the other hand, because of his experience at the UNHCR and his personal management of the population of Tindouf, Algeria will be under more pressure than during Ban Ki-moon’s tenure to allow the United Nations to conduct a census in the Tindouf camps. Guterres has repeatedly asked the Algerian government to allow the United Nations to conduct the census and to respect its international commitments related to the protection of refugees and stateless persons.

It is likely that the reports Mr. Guetteres will submit to the Security Council in the coming years will reflect his profound knowledge of the matter and his personal conviction that Algeria must be compelled to respect its international commitments on refugees.

Guterres was responsible for setting the number of Saharawis at Tindouf at 90,000, while Algeria and the Polisario have been claiming that this number amounts to 160,000. Given his profound knowledge of the conflict, is it also likely that the diversion of European aid to the Tindouf camps will be among the aspects he will address during his term of office.