Juba - King Mohammed VI, accompanied by the South Sudanese President Salva Kiir Mayardit, visited on Thursday the Royal Armed Forces’ field hospital set up in Juba as part of a humanitarian mission for the people of the Republic of South Sudan. 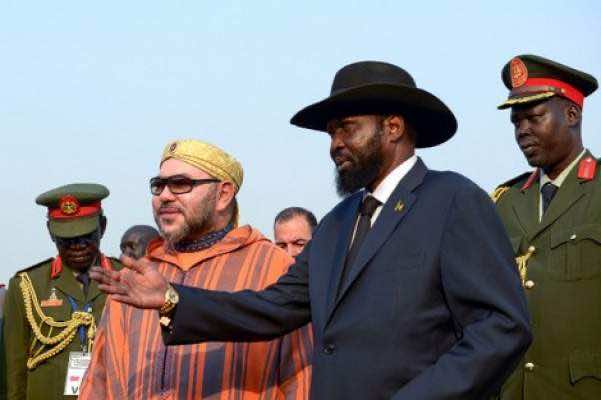 Juba – King Mohammed VI, accompanied by the South Sudanese President Salva Kiir Mayardit, visited on Thursday the Royal Armed Forces’ field hospital set up in Juba as part of a humanitarian mission for the people of the Republic of South Sudan.

The Moroccan monarch was informed about the hospital’s modern equipment and the high-quality services offered by the facility to South-Sudanese population.

Accompanied by Mr. Salva Kiir Mayardit, the King visited the various services of the hospital which has witnessed a great attendance since it was launched. HM the King also posed for a souvenir photo with the field hospital’s staff.

This field hospital, which was set up on January 23, 2017, has a capacity of 30 beds that can be extended to 60. It comprises 20 specialist doctors and 18 nurses and provides medical services in various specialties including pediatrics, internal medicine, surgery, cardiology, traumatology, dentistry, ophthalmology and ENT medicine. The hospital has also a medical laboratory and a pharmacy. During the period of January 23 to February 1, the hospital received 4,583 patients and provided 7.936 medical consultations, including 1,259 emergency cases.

This hospital, located at the heart of Juba, reflects the high royal solicitude towards the people of South Sudan to assist them and provide them with the necessary care. It is also part of the active solidarity of Morocco with the brotherly people of the Republic of South Sudan.