Morocco World News
Home News Morocco Benkirane: I Am Not Waiting for Leader Parties to Answer Me about...

Rabat - Morocco’s appointed Head of Government Abdelilah Benkirane was quoted by reporters, saying that he “is not waiting for the leader parties to answer him about the formation of government.”

Rabat – Morocco’s appointed Head of Government Abdelilah Benkirane was quoted by reporters, saying that he “is not waiting for the leader parties to answer him about the formation of government.”

As soon as the meeting of the General Secretariat of the Justice and Development party (PJD) ended on Sunday, Benkirane said that “the negotiations of forming a government coalition have been paused.”

Benkirane noted that this decision followed his communiqué entitled “Talks are over,” saying that his deliberations with both Aziz Akhannouch, Secretary General of the National Rally of Independents Party (RNI) and Mohand Laenser, Secretary-General of the Popular Movement (MP) have ended.

Benkirane went on to add that to date he has not had further contact with “the leader parties, including Akhannouch, who is currently accompanied King Mohammed VI in his tour to Africa.”

During their previous meeting, PJD members reported that they might negotiate with the major parties of the former government coalition, including the PJD, the MP, the RNI, and the Progress and Socialism Party (PPS).

Following the coalition of Constitutional Union (CU) and RNI members of parliament, the CU might also end up as one of the parties that will lead the government in the next five years.

It was also reported that the Social Union of Popular Forces (USFP) would not join the government, despite the January’s election of USFP’s member Lahbib El Malki to lead the House of Representatives.

After four months of delay following his appointment as Head of Government on October 10th, Benkirane has not announced the parties that will lead the Moroccan government in the next five years. 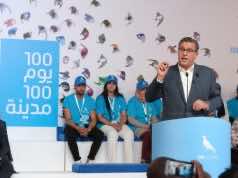