Rabat - Morocco and Zambia are expressing their commitment to further strengthening their bonds of friendship and cooperation. 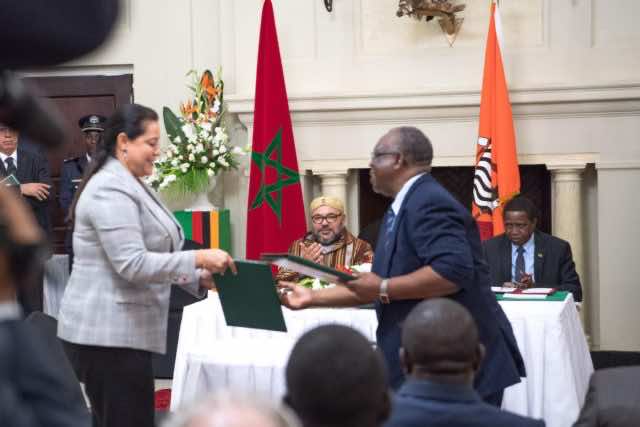 Rabat – Morocco and Zambia are expressing their commitment to further strengthening their bonds of friendship and cooperation.

The two parties have agreed on the need to establish a Zambia-Morocco Joint Permanent Commission of Cooperation (JPC). According to a joint statement issued following the official visit to Zambia by King Mohammed VI, it would provide the necessary legal framework for strengthening existing economic and social cooperation between the two countries.

A Meeting of Two Great Minds

Zambian President Edgar Chagwa Lungu and King Mohammed VI, held a fruitful one-on-one discussion during which they discussed issues of mutual interest on bilateral, regional and multilateral levels. The statement issued underlined that “the discussions were held in an atmosphere of utmost friendliness that has long characterized the close and warm relations between Zambia and the Kingdom of Morocco.”

King Mohammed VI lauded the initiatives undertaken by President Lungu to advance the social and economic growth of Zambia. He commended His efforts to promote Zambia’s role as a key actor in the sub region and assured him of Morocco’s unwavering support.

The Importance of Investment

The two heads of state each stressed the role investment plays in both public and private sectors. It promotes critical growth and development in virtually every social and economic sector.

According to the statement, the two leaders expressed satisfaction at the successful outcome of the Business Forum held between the Zambian and Moroccan business community. The two Heads of State presided over the signing of a number of bilateral Agreements and MOU’s in multiple areas. They will form the legal framework that will provide the structure for continued bilateral cooperation between Zambia and Morocco.

King Mohammed VI reaffirmed the commitment of the Kingdom’s commitment to strengthen existing bilateral relations between the two countries, it said, adding that the sovereign’s visit to Zambia demonstrates the importance the Kingdom of Morocco attaches to existing warm relations with Zambia. “King Mohammed VI looks forward to receiving His Excellency, the President, in Morocco,” the joint statement concluded.

Zambian Official: Autonomy Plan is Only Solution to Western Sahara