Rabat - King Mohammed VI, accompanied by Prince Moulay Ismail, arrived on Friday in Abidjan for a friendship and working visit to the Republic of Côte d'Ivoire, new leg of a royal tour that took the sovereign to Ghana, Zambia and Guinea.

Rabat – King Mohammed VI, accompanied by Prince Moulay Ismail, arrived on Friday in Abidjan for a friendship and working visit to the Republic of Côte d’Ivoire, new leg of a royal tour that took the sovereign to Ghana, Zambia and Guinea.

At the Félix Houphouët-Boigny airport, the King was greeted by Ivorian president, Alassane Dramane Ouattara, who was accompanied by Côte d’Ivoire’s First Lady Dominique Claudine Ouattara.

King Mohammed VI and the Ivorian head of state headed for the VIP stand to salute the national flags while the anthems of the two countries were playing, and reviewed a detachment of the republican guard which paid the honors.

The sovereign was afterwards greeted by chief of general staff of the Ivorian armed forces, the gendarmerie commander, and director general of police, presidents of republican institutions, state ministers, ministers and secretary general of the government.

The Ivorian president greeted the members of the official delegation accompanying the King, as well as the Moroccan economic operators.

After a short break at the airport VIP lounge, the procession of the two leaders headed for the residence of the King in Abidjan. 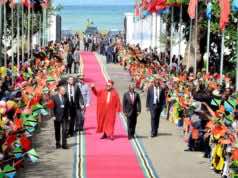