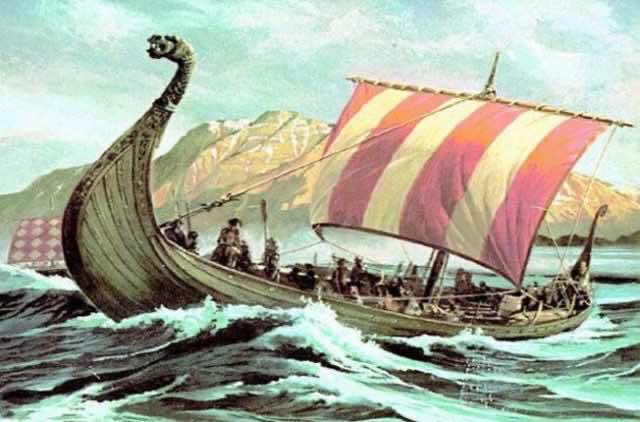 Marrakech – There are many facts and myths concerning the Vikings and their glorious expeditions and marks in history.

In old Norse, the word “Vikingr”, is a term used to characterize the famous Scandinavian civilization that existed between the 8th and 12th centuries. While there are many theories explaining why the Vikings decided to navigate from Scandinavia in search for new territory, the most common and famous one is purely economic.

Economic interest in Northern Europe was low since farming lands were not fertile while goods and resources were scarce. Known as fierce warriors, merchants, and passionate explorers, the Vikings were always attracted to goods and resources and have travelled to numerous destinations all over the globe from the North Atlantic Islands to European and Asian territory, and notably, Northern Morocco.

Famous Muslim historian and geographer from Andalusia Abu Abdullah al-Bakri mentions in his “Book of Roads and Kingdoms” (Kitab al-masalik wa-al-mamalik) that the Vikings (to which he refers to as “Majus”) raided the city of Nekor (located in modern day Rif, Morocco) in their North African adventure where they held numerous prisoners as slaves. This supports historical Viking presence in Morocco.

It is important to note how the Vikings ended up in Morocco following their famous raids in Spain. The Majus, or “Nurman” (North Men) as called by the Andalusians, most probably had no intention to navigate through the Mediterranean Sea before clashing with the Muslim Caliphate of Andalusia. They attacked Lisbon and Sevilla where they took many fortunes, goods, as well as women and children.

The Andalusians undertook a different strategy when they faced the Vikings a second time. Caliph Abdu-al-Rahman the third was advised by famous scholar Ibn-al-Habib to declare war on the Vikings. They decided to switch strategies and stop them on the sea instead of engaging with them in land battle.

On the sea coast of Lisbon, canons and archers were installed and used to attack seventy Viking warrior ships in which half were burnt. This particular battle with the Muslim Kingdom of Andalusia took place in 859 and is considered to be one of the most important battles of history, according to Dr. Umar F. Abdullah, founder and director of the Nawawi Foundation based in Chicago, USA. The remaining fleets were therefore forced to escape and continue through the Mediterranean Sea where they eventually ended up in Morocco and spent eight days.

Following their defeat in the coast of Andalusia, many of the Vikings captured were punished while a minority converted to Islam and were allowed to settle in the city of Jerez de la Frontera, in the province of Cádiz.

Based on the historical records from the Fragmentary Annals of Ireland, the Vikings have raided a part in the north of Morocco during the 860’s, where they battled the Berber Kingdom of the Moors.

As suggested by the annals, this took place following their famous raids in Britain navigations across the Cantabrian Ocean, which lies between modern Ireland and Spain, where they continued exploring and raiding. When they reached North Africa, they had to face the Berber king of Mauretania (not to confuse with Mauritania, the country) in a bloodbath where numerous warriors from both sides died.

The Berber king lost a hand in this battle which resulted in both parties agreeing to challenge each other the following day. Due to a retreat from the part of the kingdom, the battle did not take place and the Vikings held many prisoners as captives, to be taken back to modern-day Ireland.

In her academic blog, British historian and writer Dr. Caitlin R. Green from The University of Cambridge and Institute of Continuing Education, has viewed the Fragmentary Annals with suspicion, linking them to archaeological evidence discovered in burials that date as far back as the time of medieval Britain and skeleton remains.

The skeleton remains were of rodents (house-mice) and discovered in the Portuguese island of Madeira, not far from Morocco. This is considered evidence of human activity and settlement in the territory and the Vikings are known to take mice with them on their numerous journeys and raids way before the 11th century, when the Portuguese Empire colonized the coastal regions of Morocco.

The Vikings have explored major areas in the world and marked their place in history not only through battles but also in trade and commerce. On the contrary to popular belief, they have not destroyed everything in their path but were also open to communication and trade with other civilizations.

Also, one can wonder whether the Muslim Vikings who settled in Andalusia were part of the Moors who were forced to exit Andalusia after the famous Reconquista, where all of the Muslims were driven out of Andalusia.

Another theory would be them being part of the Moorish, or Moriscos, who were allowed to stay in the peninsula if they converted or were coerced into converting to Christianity. In both cases, however, most of these groups of people would end up in Morocco. This poses a very interesting debate on the Moroccan population; do Moroccans have any Viking blood?