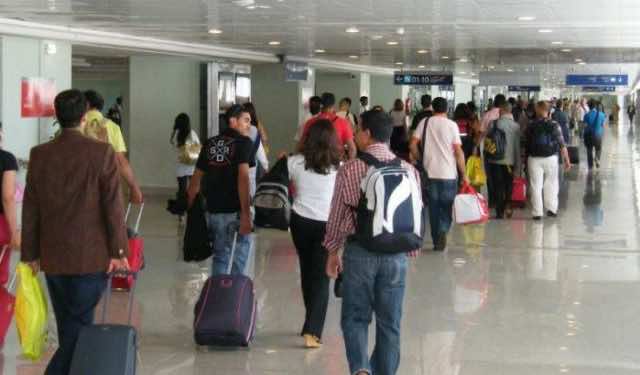 Rabat – On Tuesday, March 21, the US Department of State was required several companies based in the Middle East and Africa to restrict all electronic devices larger than a mobile phone in carry-on baggage effective immediately.

This means that all electronic devices will have to be stored in a checked luggage. This policy considerably increases the inconvenience of travelling for many passengers who may need access to their electronic devices for work related purposes. Meanwhile, medical devices essential to a passenger’s health are excluded from the ban.

US government officials, speaking anonymously, said the decision was driven by “security concerns” and the increased fear of an attack on commercial airlines. It appears to be linked on intelligence that groups such as Al-Qaida are experimenting with turning laptops and other electronic devices into bombs, with officials often citing a bomb possibly hidden in a laptop that exploded aboard a Somali plane flying to Djibouti.

However, this justification raises many interrogations about the validity of the ban. Passengers flying to the US on these select airlines will still be able to travel with their electronics, only in their checked baggage. Additionally, no American carriers have been affected by the ban even if they fly to the select airports. And finally, the move seems to contradict the US federal aviation authority’s own concern over the presence of lithium batteries – found in laptop and other electronic devices – in a plane’s cargo hold.

It may not be all about security. In February, President Trump met with executives of US airlines and pledged to help them compete against foreign carriers. US carriers have regularly accused targeted carriers – Air Emirates, Etihad Airways and Qatar Airways – of receiving massive subsidies from their governments, making it harder for them to compete.

These airlines, as well as the others affected by this ban, are likely to lose a major amount of business. Indeed, the most lucrative customers for these companies fly in business or first class in order to work on flights, and often do not check any luggage in order to travel faster. If they aren’t able to use their devices anymore due to the ban, or are forced to check luggage, these travelers, as well as some leisure travelers, might prefer to fly on unaffected (and largely US based) airlines instead.

This measure doesn’t only affect the direct flights to and from the US but also the hub airports for these companies. Indeed, while these airlines fly passengers to and from the US, they also connect passengers with many other destinations. If passengers no longer want to fly through the regulated airlines, they will not travel through the connecting hubs, thus affecting passengers on many more flights than the specific ones being regulated, possibly dealing serious economic damage.

Additionally, this measure affects many American citizens either living abroad, or travelling for business reasons abroad. Being forced to store their electronics in a checked baggage can potentially result in the theft or damage of these devices. How will the US government deal with these claims should the ban be prolonged.

But can these companies do anything to defend themselves against this new American policy? It makes it hard for affected airlines to take a free trade legal case against the US due to its credible security justification for the new regulation. However, Morocco and the US have a free trade agreement between each other, making this new ruling problematic on a free trade perspective. Indeed, this policy is restrictive against Royal Air Maroc and goes against the agreement between the two countries.

Thus, the airline companies affected by the ban, as well as the states (all Muslim countries) have a standing to sue the US government and its policy as a protectionist policy. Any claim will have to be undertaken diplomatically by the affected countries, based on their individual treaties with the United States.

Further, the details of this measure calls to mind President Trump’s recent travel ban for six Muslim-majority countries. That ban was overturned by a federal court in Hawaii last week, judging it to be discriminatory towards Muslims, citing many of the rhetoric used by Trump during his campaign.

According to Elisabeth Myers, Adjunct Associate Professor of Law, American University Washington College of Law, “both bans are very comparable as they discriminate against majority-Muslim countries.” It is therefore likely that in the coming week opposition in the US may overturn this new ban for the same reasons as for the travel ban.