Toronto - US military officials have confirmed that they have dropped the “mother of all bombs” on a series of caves in Afghanistan known to be used by ISIS fighters, located near the border with Pakistan, on Thursday. 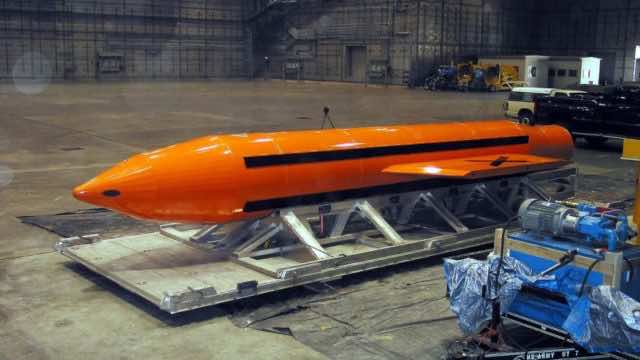 By
Constance Renton
-
Constance graduated from the Television and Radio Broadcasting Program at Canadore College in 1983.
Apr 13, 2017
Spread the love

Toronto – US military officials have confirmed that they have dropped the “mother of all bombs” on a series of caves in Afghanistan known to be used by ISIS fighters, located near the border with Pakistan, on Thursday.

The 9800kg bomb represents the largest non-nuclear explosive device ever used by the US in combat. It was developed ahead of the Iraq War but was never used. In fact, both George W. Bush and Barack Obama decided against the use of the device during their presidential tenures.

According to Reuters, its official name is GB4-43 and it unleashes the force of 11 tons of explosives. So far there have been no reports regarding direct or collateral damage. The cave system is located in the Achin district of Nangarhar province, close to the border with Pakistan.

According to Pentagon spokesman, Adam Stump, the bomb was dropped from an MC-130 aircraft at approximately 7:32 p.m., local time. Stump also confirmed that the bomb had been transported to Afghanistan “some time ago” for potential use.

In a statement issued by General John Nicholson, head of US and international forces in Afghanistan, “This is the right munition to reduce these obstacles and maintain the momentum of our offensive against ISIS-K.”

In a report from the Associated Press (AP), Nicholson’s statement added that the strike was designed to minimize the risk to Afghan and US forces conducting clearing operations in the Achin area, while, at the same time, “maximizing the destruction” of the ISIS fighting force and its resources.

In a statement delivered by White House Press Secretary, Sean Spicer, he said that “The United States takes the fight against ISIS very seriously and in order to defeat the group we must deny them operational space, which we did.”

This video disclose more information about what is MOAB