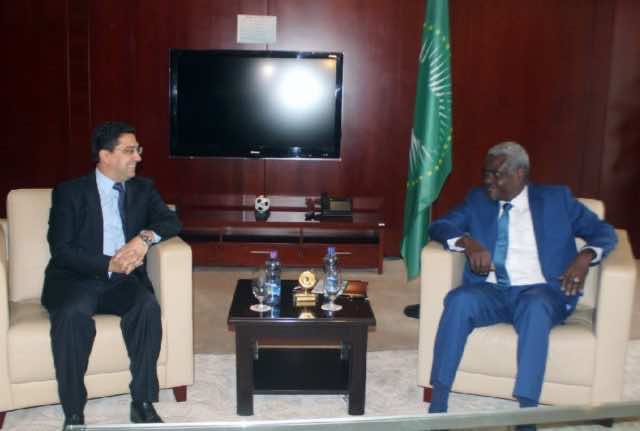 Bourita, who was a Minister Delegate to the Minister of Foreign Affairs when Morocco returned to the African Union in late January, underlined during his meeting with Mahamat “the importance of Morocco to return to the pan-African organization”, referring to “the actions” that have carried out by Morocco to make its contribution to the AU “effective.”

While discussing the routine operations of the commission, Bourita and Mahamat highlighted that the actions should be “constructive” in all issues – seeking to cooperate to ensure that “the mission of the AUC is not instrumentalized to serve agendas that pollute the union’s action and […] the process of reform the pan-African organization.”

Supported by 39 AU member states out of a total of 54, Morocco was re-admitted to the pan-African organization as a full-fledged member in January 2017 after a 33 year-long absence.

Following the re-admission of Morocco during the 28th Summit of the African Union, King Mohammed VI delivered a speech, highlighting the position of Morocco in Africa, the projects that have been made to consolidate South-South partnership, and Morocco’s initiative to provide Sub-Saharan immigrants emergency assistance.