Rabat - American famous rapper, Wiz Khalifa, has expressed frustration on Twitter over what he called “non-existent nightlife” in Rabat.

Rabat – American famous rapper, Wiz Khalifa, has expressed frustration on Twitter over what he called “non-existent nightlife” in Rabat.

The rapper has been in Rabat as part of Mawazine Music Festival where he preformed on Saturday in OLM Souissi.

During his stay in Rabat, the 30-year-old rapper Wiz Khalfia was apparently in search of some fun in the capital’s nightclubs. But as his tweets shows, he did not find what he was looking for.

One of Khalifa’s companions, named Nate, tweeted “Nightlife in Rabat Morocco is nonexistent…” 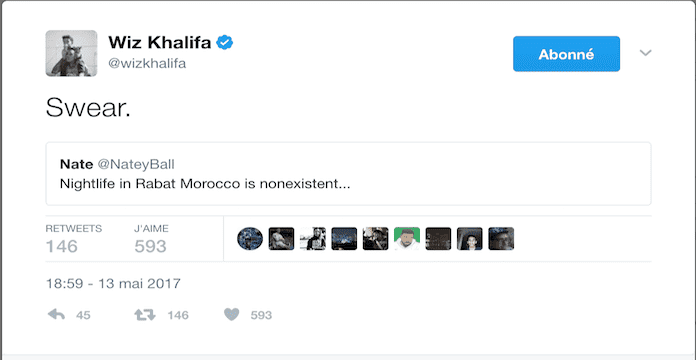 Some Moroccans offered a little piece of advice to Nate, suggesting they should go to Casablanca or Marrakech where they could find what they are looking for. Nate answered that he was told so, but explained that “it’s so far away.”

Rabat is known as a quieter place in comparison to Casablanca or Marrakech, well known for their nightlife entertainment.

Since nightclubs and parties are key to many rappers’ lifestyle, Rabat may not become a hit tourist destination for hip hop celebrities any time soon.