Rabat - With a recent diplomatic visit to Washington, Algeria has set its eyes on strengthening its relationship with the Donald Trump administration. 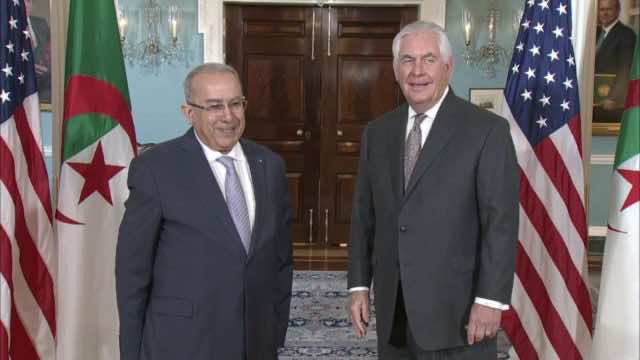 Rabat – With a recent diplomatic visit to Washington, Algeria has set its eyes on strengthening its relationship with the Donald Trump administration.

Algeria’s Minister of Foreign Affairs, Ramtane Lamamra, visited the US last week, meeting with the US Secretary of State, Rex Tillerson, and various members of Congress to discuss Algerian-US relations, security issues in Libya and the Sahel, and the North African country’s interests in the Western Sahara.

The Algerian official also advocated his country’s position vis-à-vis the question of Western Sahara, in an attempt to influence the US stance of the issue. Algeria is Polisario Front’s major, and has always been accused by Morocco as a party in the conflict.

Lamamra, former Algerian ambassador to the US, will probably try to use his contacts in Washington to lobby for his country’s interests. Since these interests collide with those of Morocco, this means the competition between the Moroccans to influence US decision making is going to intensify.

The Algerian minister sought to promote his country’s experience in fighting terrorism, which he said is based on “legitimate self-defense,” as well as the national reconciliation program launched by President Abdelaziz Bouteflika in 1999 with the aim to get armed opposition forces to give up arms in exchange of amnesty.

During his meetings with US officials and congressmen, the Algerian minister presented an image of his country as a” stable and reliable” partner in North African and the Arab world, trying to convey a message that Morocco is not the only model for peace in the region.

The Algerian minister presented his country as a valuable security partner for the US, especially as the Trump administration has expressed its concerns over the situation in the Sahel region. Fighting terrorism is an area in which Morocco has become a major ally for the US and European partners such as France, Spain and Belgium.

Lamamra’s visit also focused also on economic cooperation, meeting with the congressional Algerian caucus members to talk about the “investment climate” in the country. Algerian officials are courting American businesses in hopes of attracting investment for their country’s struggling economy.

Algeria’s economy has been largely dependent on oil revenues for decades, and the crash of oil prices since 2014 has led the government to look for ways to diversify the country’s revenue sources.

The minister said that economic cooperation needs to be strengthened, pointing to sectors which have expanded, like agriculture and pharmaceutical industry.

Algeria could be looking to strengthening relations with the White House to counter Morocco’s friendliness with Europe, as well as to capitalize on the defeat of Hillary Clinton, who was seen by some as “pro-Morocco.”

How much Algeria is really attractive to the current US administration is yet to be seen.

The country benefits from its strategic geographical position, where it shares borders with six African countries, as well as experience in dealing with terrorism. But recent attacks, including on a gas site in 2013, and the country’s opaque political system and the deep economic crisis threatening social peace all prove that Algeria is not as stable as it tries to present itself.

It also one of Africa’s main oil exporting countries, but the policies of the national oil company, Sonatrach, have on many occasion driven investors out of the country.