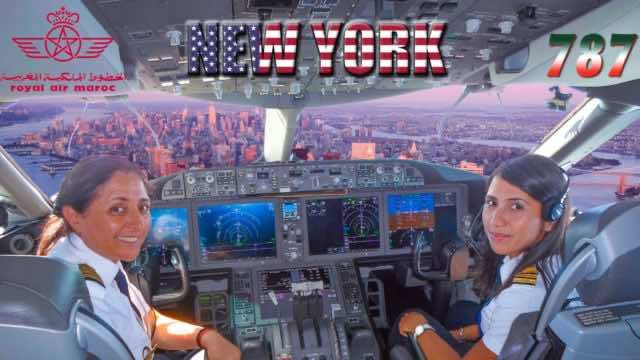 By
Chaima Lahsini
-
Chaima Lahsini is freelance journalist and activist with the Al-Fam collective in Rabat.
Jun 5, 2017
Spread the love

As RAM celebrates its 60th Anniversary this year, Just Planes featured the airline’s newest addition the Boeing 787 Dreamliner, which flies many routes between Africa, Asia, North and South America. The 210-minute  follows the plane and its two female Moroccan pilots on one of its main routes across the North Atlantic to New York City.

“Welcome aboard, here’s your pilot speaking” is the normal greeting heard when boarding a plane. In the Just Planes feature, the pilot’s voice is that of Bouchra Bernoussi, the Captain of the Boeing 787 and a woman.

This Just Planes documentary films the RAM female crew during a round trip flight from Casablanca to New York. Bernoussi, with her first officer Jihane Bidass, discuss the aircraft, the flight, the route, the weather and departure and approach information . The female pilots also share with viewers their path to becoming pilots.

As the first female pilot of Royal Air Maroc, Bernoussi is the face of girl power above the clouds. She was appointed a long-haul pilot-in-command and a ground operations director since June 2014, and has been flying since 1980. Bernoussi was one of the first two female pilots in Morocco to obtain her bachelor’s degree in mathematical sciences at the Omar Al Khayyam High School in Rabat.

With her diploma in hand, Bernoussi applied for the national contest of the pilots of line. That year, almost 900 candidates competed for only 18 seats. Bouchra Bernoussi, was successful and was one of only two women who were part of the 11th promotion of the school.

With so few women sit in the cockpit, Royal Air Maroc aspires to be the exception to the rule. Most of the time, the only women encountered on a flight are the beautiful and helpful stewardesses. To break this discriminating stereotype, the Moroccan airline is paying more attention to the feminine talents, vowing to promote more female applicants.