Morocco World News
Home Highlights on Morocco Gdim Izik: Defendants Traveled to Algeria, Were in Contact with Polisario, Prior...

Rabat - The Public Prosecution said on Monday that the defendants in the Gdim Izik case had been in direct contact with Polisario leaders, had even taking instructions from them, and had traveled to Algeria before setting up the Gdim Izik camp in October 2010. 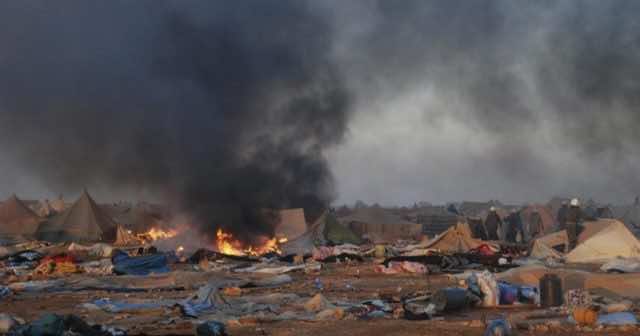 Rabat – The Public Prosecution said on Monday that the defendants in the Gdim Izik case had been in direct contact with Polisario leaders, had even taking instructions from them, and had traveled to Algeria before setting up the Gdim Izik camp in October 2010.

During his argument in the annex of Salé’s Appeals Court, representative for the Public Prosecution, Khalid Kerdoudi, said that as well as illegally carrying hard currency, “the defendants had committed the felonies of forming a gang and actly violently toward on-duty law enforcement officers.”

Kerdoudi asserted that “creating chaos and terror, shaking stability and security, and disturbing the public order in the city of Laayoune and its region,” were the aims of the defendants, as part of a planned criminal conspiracy.

25 defendants held a series of meetings to obtain funds to finance their crimes, according to Kerdoudi.  They received various weapons, logistic materials, vehicles, communication devices, and agreed to detain citizens, he said.

Kerdoudi went on further to assert that head of the camp, Asfari Naama, had tried many times to build the camp in different locations, before managing to establish the Gdim Izik camp on October 10, 2010. “The camp was constructed following meetings held in Algeria –  it has come to light that the defendants traveled from the airport of Laayoune on September 27-30, 2010.”

In a press conference after the trial, the court’s Crown Prosecutor Hassan Daki asserted that crossing the border from Morocco to Algeria was evidence that the time and circumstances that created the Gdim Izik camp were not coincidental, and that the defendants “were visiting a neighboring country hostile to Morocco in preparation for the establishment of the camp.”

According to Kerdoudi, “some of the defendants had acquired military training in the Tindouf camps and Polisario militia camps. They also received funds from abroad and toured across some cities after their return from Algeria in order to mobilize the families to go to the camp of Gdim Izik.”

Kerdoudi asserted that the calls of defendants with people outside Morocco were examined by the court, which found three major topics of conversation: the foundation of Gdim Izik camp; the absolute necessity not to agree with the public authorities’ solutions to dismantle the camp, and to respond by making impossible demands in this framework.

In addition, they influenced the population to stay in the camp by not telling them what solutions had been agreed upon with public authorities.

Several calls were with Algeria-backed Polisario’s leaders, including Sidi Mohammed El Khalil and Omar Boulessan, of whom the latter used an “imperative tone.” In one of the calls, Boulessan told the defendants,  “you should not sit down with the Moroccan authorities – you have to put pressure on them…. Each person negotiating must exert pressure.”

In a second call he continued “I know that it is not Boulessan who addresses you, but the Sahrawi Popular Republic (self-proclaimed Sahrawi Arab Democratic Republic) – I am informing the boss that something has happened.”

Kerdoudi also asserted that witness testimony had shown that the Gdim Izik camp was well organized and had a security barrier to observe cars entering the camp. Accounts recalled that some of the people running the camp wore yellow shirts to show they were guarding the safety of the camp, while some guards wore military outfits.

“The camp was a small barracks controlled by a group of people with criminal records,” said Kerdoudi. “Confrontation with public forces was desirable.”

In the Gdim Izik trial, 25 people are being prosecuted for alleged crimes relating to the tragic events that took place on November 8, 2010 in the village of Gdim Izik. when 13 individuals were murdered – 11 were police officers and one was a firefighter.

The deaths occurred as Moroccan security forces dismantled a camp where people had been living in protest of the unemployment and lack of opportunities in the city of Laayoune. Seventy people were injured in total and public property was destroyed.