According to statement by the airline, flights will be offered aboard an Airbus 320 three days a week: Tuesday, Wednesday, Friday.

Flights to Paris will begin on October 31, with prices starting from MAD 599.

Air Arabia CEO Abel Ali stated, “This new line solidifies our continuing approach in favour of increasing the touristic and economic exchanges between Morocco and France.”

Based in Casablanca and founded in April 2009, Air Arabia Maroc is Morocco’s first low cost airline. 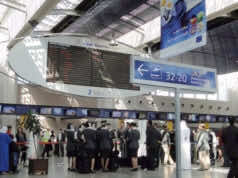