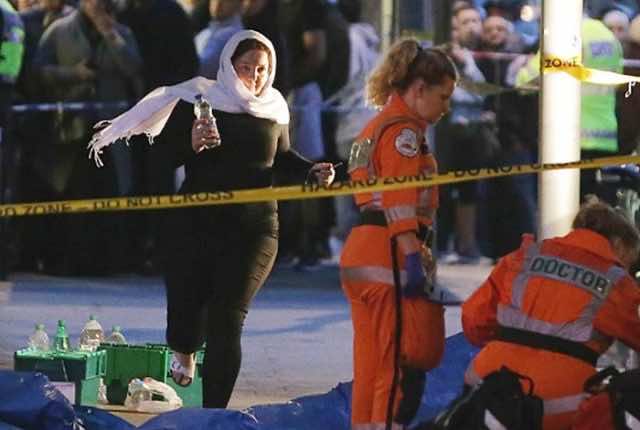 Rabat – Muslims who stayed up late for Suhur in Ramadan helped save lives after the incident of the Grenfell tower in west London on Wednesday morning.

17 people were killed and more than 50 are being treated in the hospital in the aftermath of the horrific Grenfell tower fire in London on Wednesday. A great number of the victims of the incident were evacuated and others were trapped until they were saved by the firefighters.

After the incident, hundreds of people came to the rescue including Muslims, who were awake to begin their Ramadan fast when the fire broke.

A video of local women talking about this tragedy and praising Muslims for helping the victims of the attack circulated around the web. A local woman thanked a Muslim woman saying: “Thank you Ramadan, Thank you for Ramadan!”

Another woman described the events and how Muslims came running to people’s doors and rushing to the rescue in order to help save them from the fire. She said: “If it wasn’t for all these young Muslim boys around here helping us, coming from mosques, people would have died.” She also stressed the fact that the media is not talking about this, saying: “They wanna talk about them when they do wrong… They were the first people with bags of water, giving people and helping people.

On twitter, many people tweeted pictures and videos that show how Muslims helped the victims of this tragedy, in order to stress how the media does not talk about this.

What the media don’t show you #MuslimAid#GrenfellTowerpic.twitter.com/hQRrTVNDSy

One of the Muslims who helped during this tragedy is the 20 year-old Khalid Suleman Ahmed, who moved to the tower to live with his aunt. He told the Huffington Post UK thathe stayed up late for Suhur,and when he smelled the smoke and looked over the window and saw the seventh floor on fire, he started banging on his neighbors’ doors so as to wake them.

Different Islamic cultural centers and mosques opened their doors to help the people who were affected, including the British Muslim Community that raised over 30000 pounds within only a few hours of the fire, Muslim Aid and Al Manaar, the Muslim Cultural Heritage Centre.

We’re on the ground, providing much needed help & support
we are working alongside local partners #grenfelltower#zakatpaid#muslimaidpic.twitter.com/zPCZt1xtlz

The fire broke out in the Grenfell Towerafter 1am on Wednesday, which resulted in the death of 17 people and the injury of more than 50.