Rabat - A meeting between the Israeli communication minister and the Polisario Front chief has been used by Israeli media, claiming that Morocco, who cut ties with Israel in 2001, felt its “friendship” with the Zionist state was being threatened. 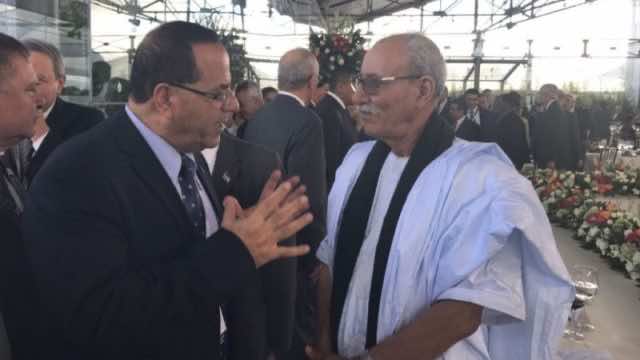 Rabat – A meeting between the Israeli communication minister and the Polisario Front chief has been used by Israeli media, claiming that Morocco, who cut ties with Israel in 2001, felt its “friendship” with the Zionist state was being threatened.

Earlier this week, the Times of Israel claimed that Morocco made a formal complaint to an Israeli embassy in Europe about a meeting between Israeli Minister of Communication Ayoub Kara and Polisario Front chief Brahim Ghali.

In May, Kara and Ghali attended the swearing-in ceremony of the President of Ecuador Lenin Moreno. Kara met the Polisario chief and other members of Arab delegations at the ceremony and wrote about the meeting on social media, attempting to illustrate that Arab nations are normalizing ties with Israel.

Israeli Channel 2 quoted Israel’s Foreign Minister as saying that Kara’s meeting were “not coordinated or approved by the Prime Minister’s Office,” in a response to the alleged “protests” from Morocco.

Israel used the event to claim that Morocco is worried of potential support for Polisario. The Times of Israel even claimed that the kingdom is “one of the Arab world’s friendliest nations toward Israel.”

In late May, Jerusalem Post made another claim when it said that Israeli prime minister Benjamin Netanyahu was scheduled to meet King Mohammed VI during the Economic Community of West African States (ECOWAS) summit in Liberia.

The Moroccan Ministry of Foreign Affairs refuted the claim, explaining in a press statement that the King “wishes his first visit to a ECOWAS summit not take place in a context of tension and controversy.”

The “accuracy” of the Israeli media and officials is highlighted by the fact that, to date, Kara and the Times of Israel continue to assert that the communications minister met with the Prime Minister of the so-called Sahrawi Republic, Abdelkader Taleb Omar, and not Ghali. This is despite the fact that the picture published by Kara and used by the Israeli publication shows the minister meeting with Ghali.

Morocco cut relations with Israel in 2001 after the eruption of the second Intifada. Over the years, Israeli officials have no longer been admitted in the Royal Palace, unlike before when the kingdom was an unofficial key peace broker between Palestinians and Israelis.

However, Israeli-Moroccan tourists have not been denied travel to Morocco, where they come to visit Jewish sites and mausoleums of Jewish saints.

The kingdom used to be the Arab country with the biggest Jewish presence. Over a quarter of a million of Jews lived the country before a massive wave of migration led them to Israel, Europe, and North America.

The picture of Kara and Ghali proved at least one thing: that Polisario’s attempts to build a reputation of being “anti-Israel”, including imitating the Palestinian flag, hold no weight.