Rabat - The number of deaths caused by road accidents recorded in the first five months of 2017 amounted to 1070, a decrease of 6.64 percent compared to the same period in 2016, according the figures from Ministry of Equipment, Transport, Logistics and Water. 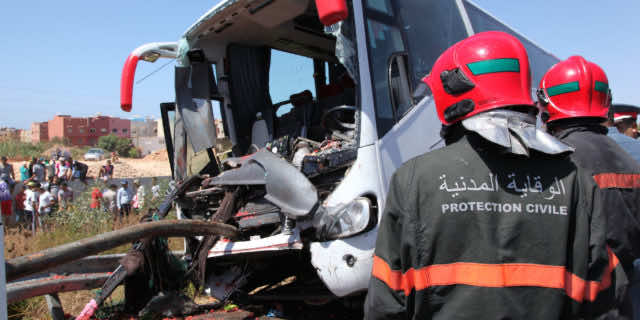 Rabat – The number of deaths caused by road accidents recorded in the first five months of 2017 amounted to 1070, a decrease of 6.64 percent compared to the same period in 2016, according the figures from Ministry of Equipment, Transport, Logistics and Water.

As the number of deadly accidentsis decreasing, the number of serious injuries caused by road accidents is also dropping. The Ministry report that during the first five months of 2017, 3349 people were seriously injured, a decrease of 2.19 percent compared to 2016.

“Road safety indicators for the first five months of 2017 are encouraging. They show a decrease in the number of fatalities, serious injuries and fatal accidents and subsequently the severity of accidents,” said Azzedine Chahidi, head of the Road Safety Division of the Directorate of Road Transport and Road Safety.

With the aim of fighting road accidents, the ministry has implemented a six-month emergency action plan with the focus of strengthening roadside controls.

This measure, which started onJune22, will continue until the end of the year. “We preferred to extend this operation beyond the summer season because of the Eid Al Adha and back to school which are periods of intense road traffic,” said a statement from the ministry.

In addition, the Ministry intends to strengthen the controls at the bus stations. For its part, the National Committee for the Prevention of Road Accidents (CNPAC) has prepared a broad communication campaign to accompany the actions of the ministry.

The same source added that at the end of each month, stakeholders including Ministry of Transport, National Security, Royal Gendarmerie, Ministry of the Interior, and CNPAC will holda meeting to discuss the outcomes of the month’s road regulations.