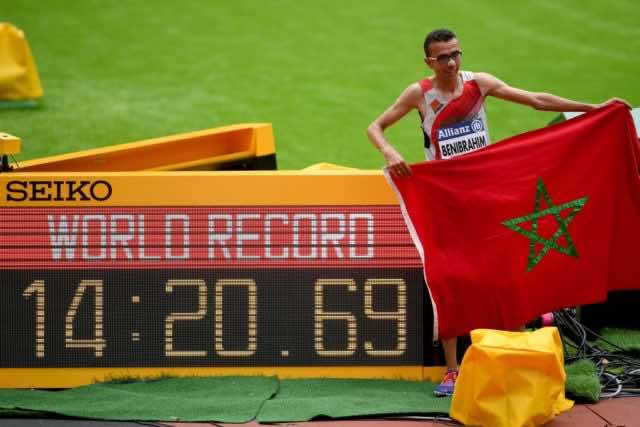 By
Chloe Koura
-
Chloé Koura is a final-year student of Arabic and Latin at the University of St Andrews.
Jul 17, 2017
Spread the love

Benibrahim beat by 13 seconds the previous world record, made by Tunisian Bilel Aloui, who came second in Sunday’s race. Aloui scored silver with a time of 14:21.69, while Canadian Guillaume Ouellet won bronze with a time of 14:23.24.

“This is a great birthday present, a little bit in advance,” said the 33-year old of his victory. “All my preparation was about winning a medal here in London, I did not think about the world record at all. So I am very surprised and blessed. My wife is pregnant so I want to dedicate this victory to her and also to my coach and my mother.”

Fellow Moroccan El Amin Chentouf led for much of the race but dropped out two laps before the end.

Athletes competing in T13 sports events have the “least severe visual impairment eligible for IPC Athletics,” according to classification information. They have “the highest visual acuity and/or a visual field of less than 20 degrees radius.”

Morocco has sent 14 athletes to take part in the World Para Athletics in London, which is taking place July 14 to 23. The president of the Royal Moroccan Sports Federation for Handicapped People, Hamid El Aouni, is accompanying the Moroccan participants, who are competing in events including the javelin, high jump and 100m.