Toronto - The model known simply as “Khulood” is the subject of an arrest warrant in Saudi Arabia after she posted a video of herself walking through a village wearing only a cropped t-shirt, mini skirt and sneakers. 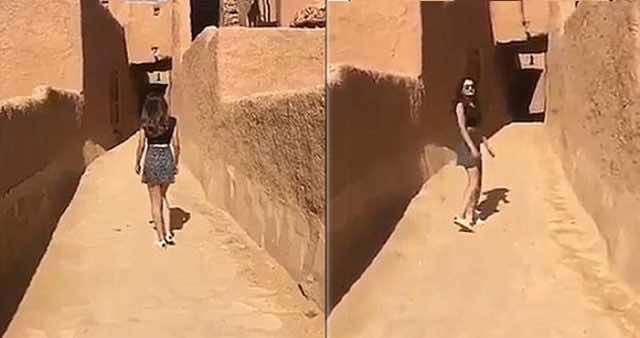 Toronto – The model known simply as “Khulood” is the subject of an arrest warrant in Saudi Arabia after she posted a video of herself walking through a village wearing only a cropped t-shirt, mini skirt and sneakers.

The video was posted by the model herself on her Snapchat account as she walked through a deserted fort in the conservative village of Ushaiqer in what is considered less than modest public attire.

The appearance of the video online attracted immediate attention from social media users in the country. Although some came to Khulood’s defense, most of the reaction was negative, with many angry posters calling for the model’s arrest.

One supporter tweeted “This is an arrest warrant out for me. Did you kill someone? No, much worse. I wore a skirt.”

The majority of the tweets expressed anger:

“She has to be punished in front of everybody for her hideous and insulting act of nudity. She wants to create chaos for Muslim women.”

Another said, “She crossed her limits and she did not take God’s limits into consideration. She must go to jail with whoever filmed her. We have our traditions and customs and, most importantly, our religion.”

According to Okaz, Ushaiqer officials asked the governor and police to intervene when they became aware of the video. Following an investigation, Saudi officials issued the warrant for Khulood’s arrest.

A statement released by the General Directorate of Public Security’s spokesman for the Riyadh area, clarified that “The concerned authorities in the area have found many videos circulating on social media containing a woman waking around the heritage village of Ushaiqer, in Shaqraa province, wearing provocative clothing.”

The spokesman also revealed that the anti-crime system identified the woman and brought her in for interrogation, during which they found out that the video at the heart of the furor was posted to her Snapchat account without her knowledge.

Foreign and local women in Saudi Arabia are mandated to wear a garment called an abaya when out in public. It is a long, loose fitting covering that is usually accompanied by a head cover and sometimes a face cover as well.