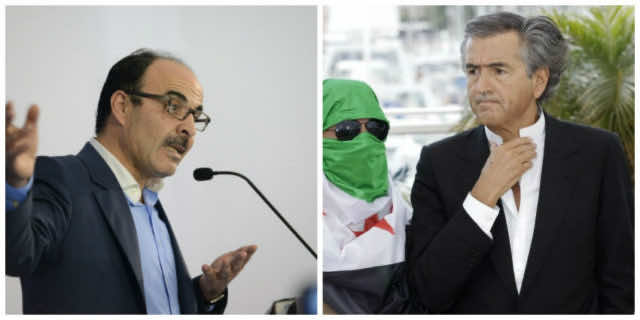 El Omari, who also serves as the leader of the major opposition Authenticity and Modernity Party (PAM), has revealed in a Facebook post that he ran into Levy in Tangier.

The wealthy French “philosopher” was an unwelcome sight for El Omari and prompted the Moroccan politician to ask about the meaning of his stay in Tangier, with suspicion. Levy is known for his campaign against the Libyan government in 2011 as well as his campaign for support of the NATO military intervention in Libya.

“What Bernard Levy is here for in Tangier at this particular time?” El Omari asked, in a clear reference to the ongoing protests in the northern city of Al Hoceima and its surrounding areas.

“It is known that this person spends his holidays in tension zones such as Libya, Syria, Iraq and occupied territories,” wrote El Omari. “What is striking is that Bernard Henry Levy is described as ‘war raven’ because death and destruction comes whenever he goes.”

He added that the controversial French writer and TV personality “is known for paving the way” for turmoil and armed conflicts, pointing out that Levy came more under the spotlight during “the so-called Arab Spring revolutions.”

While he did not establish a direct link between Levy’s presence in Morocco and the ongoing protests in the Rif region, El Omari nonetheless expressed his concern over seeing the pro-Israel author of “La Guerre sans l’aimer,” (War Without Loving It).

“I am sharing my question so that I don’t repeat the old story about a Zionist conspiracy, but just to drawn my fellow citizens’ attention,” he said.

What El Omari probably did not know is that Levy owned a luxurious mansion worth six-million Euro in Tangier which he put up for sale earlier in July, as several media outlets reported. The French writer is also an habitué of another Moroccan city, Marrakech.

While establishing a link between Levy and the protests in Rif might seem a hasty conclusion, what is clear is that the controversial French intellectual enjoys a very bad reputation in the Arab world.