Rabat - The final game of the Arab Football Championship in Cairo between Esperance from Tunisia and Al Faisaly from Jordan on August 6 turned into a shocking scene of violence. 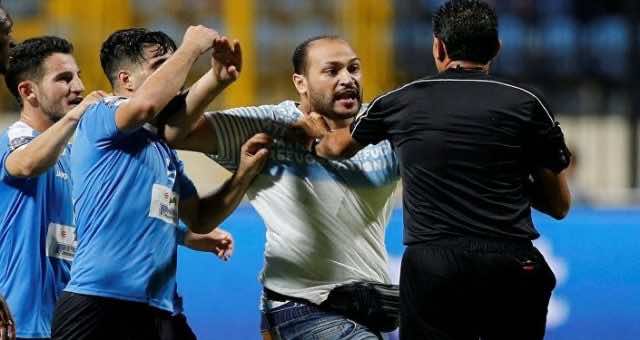 Rabat – The final game of the Arab Football Championship in Cairo between Esperance from Tunisia and Al Faisaly from Jordan on August 6 turned into a shocking scene of violence.

The game ended with a victory 3-2 victory by Tunisia in extra time.

The Jordanian team found the defeat difficult to swallow, accusing the Egyptian referee Ibrahim Nour El-Din of allowing an illegal goal to stand.

Infuriated, they claimed a player from the opposite team had been off sides when the goal was scored.

After the game was over, Al Faisaly’s players and staff surrounded the referee. Despite security elements’ attempts to make a human shield around him, the angry Al Faisaly players jumped around the circle and dealt blows to Nour El-Din.

Following the game, King Abdullah of Jordan and Queen Rania tweeted praise of Al Faisaly’s “achievement” of winning second place in the championship.

The king’s omission to talk about the violence of the Jordanian team was met with criticism by some Twitter users, including Egyptian footballer Mohamed Geddo.

“Why isn’t there a word from your excellency about the violence against the referee by your team?” wrote the former Egyptian national team striker.

The Arab Championship also saw violence in the semi-final on Thursday, when players from the Moroccan team Fath Union Sport attacked the Saudi referee in their game against Esperance.

The Moroccan players had become angry at the Saudi referee for sending two of their squad out with red cards and giving the Tunisian side a penalty during overtime.