Rabat - The Berkane slaughterhouse featured in a recent video purporting to show its unsanitary working conditions has been temporarily closed for investigation as of August 7. 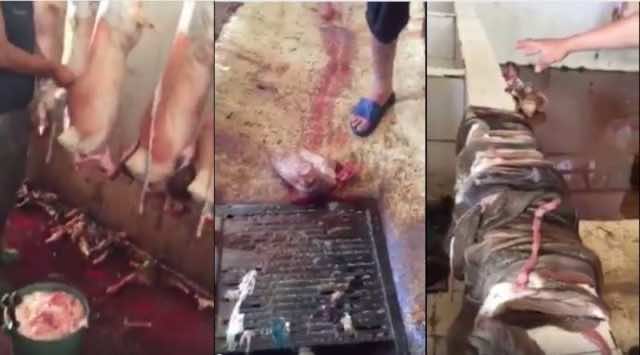 Rabat – The Berkane slaughterhouse featured in a recent video purporting to show its unsanitary working conditions has been temporarily closed for investigation as of August 7.

The video, essentially a tour of the slaughterhouse by one of its workers, shows the building’s decapitated conditions, offal strewn on the floor, and workers cleaning meat in dirty water. Some employees implore viewers not to eat meat coming from the facility.

After the video began stirring local social media on August 1, Mustapha Kaouri, the premier vice-president of the municipality of Berkane, told the news site that the video didn’t reflect “the entire reality of the slaughterhouse,” and that consumers “risk nothing” from eating its meat.

The vice-president revealed that the municipality had issued a complaint against Adbessamad Belaaziz, the director of the news site AalamOnline which had originally published the video

Kaouri claimed that the complaint was not about the video per-se, but rather about the nature in which it was filmed.

“It’s because [Belaaziz] didn’t have the necessary authorizations to film,” said Kaouri. “He also attacked one of our officials, [who was] sent to the emergency room from 9:30 a.m. to 2:30 p.m.”

Belaaziz denied to HuffPostMaroc that he needed authorization. “I was simply responding to the request of the officials of the slaughterhouse. And I never attacked a watchman or anyone else.”

AalamOnline’s director said he had lodged his own complaint against Kaouri and the municipality’s president, Mohamed Ibrahimi, and announced that he would hold a sit-in Friday, August 11 at the city council.

Recently, the unsanitary conditions in which much Moroccan meat is processed have come to light.

A report by the Court of Auditors released July 10 revealed that just five slaughterhouses in the kingdom met national hygiene and sanitation standards, citing instances of rusty equipment, lack of potable water, and broken truck refrigerators.