Rabat - “If you still don’t speak English, go kill yourself,” says the peculiar ad, which shows a stick figure holding a gun to its head. 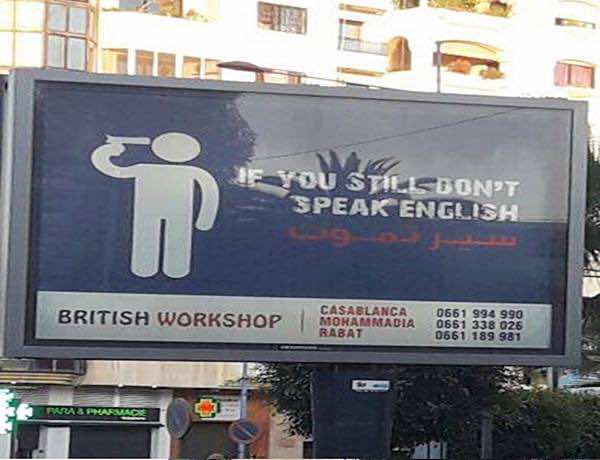 Rabat – “If you still don’t speak English, go kill yourself,” says the peculiar ad, which shows a stick figure holding a gun to its head.

Many have criticized the ad as a call for people to commit suicide if they do not speak English.

“This ad is shameful,” wrote Moroccan TV host Fayçal Tadlaoui, commenting on the message as he posted the picture of the ad on Facebook.

His angry reaction was shared by other people who commented on his post.

“I totally agree. I told myself the same thing this morning,” said one commenter.

“How come?! They are explicitly asking people to commit suicide,” added another.

Elisabeth Myers, communications and branding expert and lawyer based in Marrakech and Washington, DC., downplayed the gravity of the ad, pointing out that it is simply an advertisement that people should not take seriously.

“This billboard certainly accomplished more perhaps than the language school intended, as it has everyone talking about it now,” she told Morocco World News.

“In this day and age of information overload, sometimes marketing has to go over the top to get people’s attention. The stark messaging in this ad does just that, and it’s powerful. It uses an idiom of Moroccan culture to say: Learn English or there is not much point in living.”

She added, “It’s simply advertising. While it may be distasteful and certainly not amusing, no one can seriously take this as a call for suicide.”

The ad will be taken down tomorrow by the British Workshop.