Rabat - The first annual Juste Pour Rire Agadir kicked off August 23, with more than 30 artists from six countries participating in the festival.

Rabat – The first annual Juste Pour Rire Agadir kicked off August 23, with more than 30 artists from six countries participating in the festival.

The festival, which runs until Saturday, August 26, brings together Moroccan, Tunisian, Belgian, Ivorian, French, and Algerian artists for performances on the stages of Agadir.

Comedy in the Arabic, French, and Amazigh languages was represented in four “galas.”

Moroccan comedian Eko, the Algerian Abdelkader Sector, and the Tunisian Lofti Abdelli were on stage on stage for the first gala, ‘Les voisins’.

The festival is organized by the Juste Pour Rire association, in partnership with the Municipal Council and the Regional Council and Agadir Souss Massa Tourism Council. 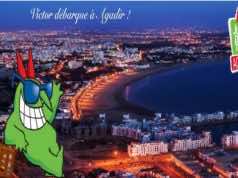 ‘Just for Gags’ for the First Time in Morocco