Rabat - With a total of 35,365 sold units during the first semester of 2017, Morocco was the top automotive African market in terms of sales for the French group Renault. The kingdom is the 15th best-selling country of the automobile group’s brands worldwide. 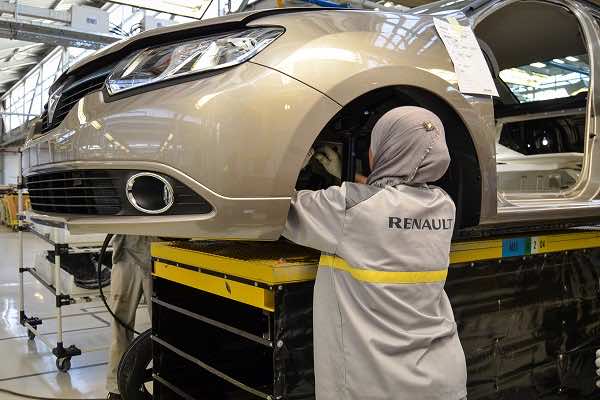 By
Chaima Lahsini
-
Chaima Lahsini is freelance journalist and activist with the Al-Fam collective in Rabat.
Sep 12, 2017
Spread the love

Rabat – With a total of 35,365 sold units during the first semester of 2017, Morocco was the top automotive African market in terms of sales for the French group Renault. The kingdom is the 15th best-selling country of the automobile group’s brands worldwide.

Morocco has affirmed its position as a strategic market for the French car manufacturer. According to its activity report for the first half of 2017, sales of new Renault and Dacia vehicles in the Moroccan market increased by 10.4 percent from 2016 in a market up 2.6 percent.

According to Renault, these results enabled the kingdom to close the worldwide ranking, dominated by France, Russia, Germany and Italy, which alone account for almost 43 percent of Renault’s world sales.

Morocco’s stellar performance means that Renault increased its sales by 10.1 percent in the Maghreb, where it is present, besides Morocco, in Tunisia, Egypt and Libya. The French group scored significant increases in this economic sub-region, where sales of new vehicles in the automotive market fell overall by 8.5 percent.

Outside Morocco, Renault counts countries like South Africa among its most important markets in Africa. However, it lost ground on its former markets of predilection established mainly in the francophone countries of sub-Saharan Africa.

According to its report, Renault explain that all the sub-Saharan countries constitute a single bloc, not even appearing in its top 15 sales. Consumers in most of these countries have been seduced first by Japanese and German cars, and today more and more by vehicles of South Korean brands.

The kingdom’s performance is all the more significant as the Moroccan market remains by far a “small” one compared with its European counterpart, with just over 160,000 units sold in 2016, all brands combined. Since the beginning of this year Renault and its satellite brands have been conducting solid incursions into much bigger markets, such as that of China, which for the first time made its entry into the top 15, positioning itself just above Morocco.

The Renault group dominates the Moroccan automotive market by far, taking over 40 percent of the global market share with 27 percent for the Dacia brand alone. In addition to benefiting from a comfortable commercial position, the French manufacturer also has an important industrial presence in Morocco in the wake of the ramp-up of its plant in Tangier-Melloussa.

With more than 7,000 employees in the various Moroccan subsidiaries, Renault accounts for more than 5 percent of the group’s global workforce, even ahead of Turkey, Brazil, and South Korea, whose participation in Renault’s global industrial system is much older.