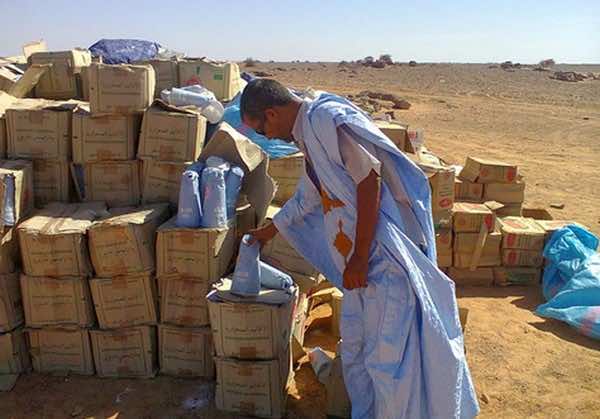 Rabat – As Polisario’s usual sources of funding dry up, local media outlets – typically aligned with the separatist front – have accused its leaders of illegally appropriating and reselling humanitarian aid on the black market.

The sweeping corruption of Polisario leadership has garnered the attention of the local media, who are accusing the leaders of the so-called Sahrawi Arab Democratic Republic (SADR) of taking advantage of humanitarian aid addressed to the Sahrawi population in the Tindouf camps.

On October 5, local media outlet Futurosahara, linked to the former vizier of the Sahrawi army, Mohamed Lamine Bouhali, openly accused the members of Polisario’s general secretariat of accumulating fortunes at the expense of the local population.

The report reiterates earlier allegations of corruption in the camps.

Speaking at the United Nations General Assembly in 2013, Nancy Huff, the chairman of Teach the Children International, accused the Polisario Front of embezzling humanitarian aid intended for the Tindouf camps, which “reveals the corruption of Polisario leaders who seek to serve their own interests.”

In 2014, the European Anti-Fraud Committee, known OLAF confirmed these suspicions in a report detailing how the Polisario leaders have for four decades been redirecting aid to the black market, turning the conflict into a lucrative business.

While this reality was kept under wraps by pro-Polisario media for 40 years as an unspoken taboo, a new shift has occurred among some outlets, who have begun openly discussing the misappropriation of humanitarian aid.  The OLAF reports detailed how this humanitarian aid is sold on the markets in Oran, Algiers, Tindouf, and even in Nouadhibou (Mauritania), Niamey (Niger) and Bamako (Mali).

In its recent article, “futurosahara” slams the local warlords for having luxurious villas and palaces in neighboring countries, accusing them if turning their backs on the local population mired in poverty.

“It is not surprising that countries such as Nigeria, Norway, Venezuela, Spain, and even Cuba are reluctant today to grant scholarships to our students,” reports the separatist publication, stressing that the grants awarded benefit only the progeny of the leadership of Rabouni.

The outlet adds that basic goods like milk, flour, peas, and other vegetables are stolen and resold on the markets of neighboring countries, causing serious problems of malnutrition among the abandoned Sahrawi population.

According to an analysis provided by Moroccan media outlet le360, this sudden outburst of anger against the leadership of Rabouni was caused by the collapse of global oil prices, causing an economic crisis in Algeria and leading the dinar to fall to its lowest level.

The most valuable banknote in Algeria, DZD 1000, is worth no more than EUR 7 today, leading the Moroccan dirham to become the main currency in the Lahmada-Tindouf camps.

As reported by le360, the expectation of the total collapse of the Algerian dinar is frightening the leadership of Rabouni, whose survival has been solely dependent on the generous donations in petro-dollars granted by the Algerian regime. Now, this is becoming a luxury that the neighboring ally, threatened by the drying-up of its foreign exchange reserves, can no longer afford.

This media outrage can be seen as the expression of tensions between old, Mohamed Abdelaziz-era leaders and newer players, who claim their share of the “cake” but find only crumbs and worthless Algerian dinars. The conflict between higher-ups could likely degenerate into an open struggle between the parties and reveal the nature of the separatist project in the Sahara.