Rabat - The Moroccan Royal Football Federation (FRMF) has come under fire for the disorganized selling of tickets to the second leg of the CAF Champions League Final between the Casablanca team Wydad and their Egyptian rival, Al Ahly. 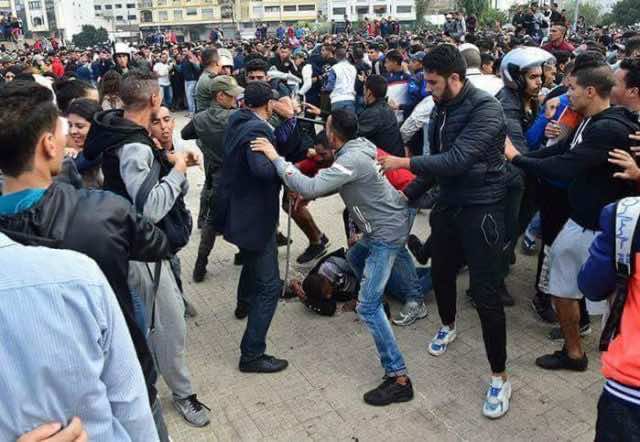 Rabat – The Moroccan Royal Football Federation (FRMF) has come under fire for the disorganized selling of tickets to the second leg of the CAF Champions League Final between the Casablanca team Wydad and their Egyptian rival, Al Ahly.

Ahead of Saturday’s decisive game, thousands of fans flocked on Wednesday to the sole ticket counter at the Mohammed V stadium. While early comers were lucky enough to buy their tickets to the much anticipated game, others ended up waiting for hours.

Soon things went out of control, as many impatient fans tried to cut the line to get their tickets. As police elements intervened to bring things to order, clashes between the two groups erupted.

The police intervention, coupled with pushing and shoving between fans, resulted in injuries and several cases of fainting. Several other cases of pickpocketing and sexual harassment were also reported.

After the incident, pictures and videos emerged of fans fainting, with blood on their faces, or being hit by law enforcement officers.

Many fans complained that they weren’t able to buy tickets despite hours of waiting, and others pointed to the high prices of tickets in the black market. Fans who usually buy tickets for MAD 30 at the regular selling points would have had to pay MAD 120 or MAD 200.

On social media, angry fans described the chaotic operation a “scandal,” saying it gives a bad image about the country, especially during its bid to host the 2026 World Cup.

“I came here at 6 a.m.,” a young fan told Hesport. “When I finally arrived at the ticket counter, police started hitting us.”

In addition, the influx of hardcore fans, who ended up blocking many of the city’s streets, was criticized by a member of the Justice and Development Party (PJD), Hajar Khaloui.

“In early morning, people with no jobs or education buying tickets block the way of those who are going to their work or schools,” Khaloui wrote in a Facebook post. “I saw all kinds of ‘scumbags’ this morning.”

Her post quickly led to backlash from Wydad fans, who demanded that she apologize.

Mohamed Abdelwahab Rafiki, an outspoken Muslim scholar and also a huge football fan, said the game’s supporters should not be held responsible for the chaos at the selling ticket point.

“It’s silly to blame fans who came very early in the morning to buy tickets for the game of its favorite team, who invested its money, time and effort and didn’t ask a charity from anyone,” he said in a Facebook post.

Wydad and Al Ahly will face each other in Casablanca Mohammed V stadium this Saturday to decide who will raise the continental cup. The first leg of the final, held in Alexandria last week, ended up with a 1-1 draw.

Wydad, the most popular football team in Morocco along with its longtime city rival Raja, is seeking to win the Champions League for the first time in a quarter of a century, since their first title in 1992.