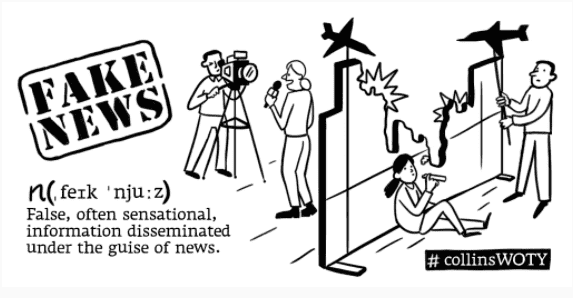 Rabat – Collins English Dictionary has codified a meaning for “fake news,” naming it the 2017 “Word of the Year.”

The Glasgow-based publication annually identifies a word that has “most grown in visibility,” based on a wide swath of media sources cross-referenced with its 4.5 billion-word computer-compiled database.

This year, lexicographers for Collins found that usage of the term “fake news” has increased 365 percent since last year. “Fake news” is, Collins explains on its website, “everywhere.”

Proliferation of the term “fake news” coincided with the 2016 US presidential election of Donald Trump, who frequently hurls the epithet at media outlets to dismiss critical and unflattering coverage.

Trump’s usage of “fake news” is often at odds with empirical evidence to the contrary, and has been characterized by his critics as a tactic to undermine the public’s confidence in US institutions and to delegitimize independent journalism.

However, the US President is not the only head of state to further disseminate “fake news.” Other international politicians have recently appropriated the phrase to dispute and disparage critical media coverage.

In a speech before supporters in September, Daw Aung San Suu Kyi, the leader of Myanmar’s civilian government, used the term to describe the UN’s claims of ethnic cleansing in Myanmar against its Rohingya Muslim minority.

In another example, Israeli Prime Minister Benjamin Netanyahu, speaking at a Tel Aviv rally in August, discounted corruption allegations as a “unified choir” of the “fake news media.”

Last week, Trump, who has previously attempted to patent the phrase “you’re fired,” claimed to be the originator of the term “fake news.” Speaking at a rally in Pennsylvania earlier this year, he said, “everybody is using the word ‘fake news.’ Where did you hear it first, folks?”

Although the exact etymology of the expression could not be confirmed, Merriam-Webster Dictionary has approximated the term entered common parlance in the late nineteenth century, noting several references to “fake news” in American newspapers from 1890 and 1891.

On Collins’ shortlist for “Word of 2017” were “fidget spinner” and “antifa,” the latter an abbreviation of the word “anti-fascist.”