Rabat - Saturday night was an eventful night as a crowd of Moroccan fans headed to Rabat-Sale airport to greet their beloved team to Morocco after a blowout win over Cote d’Ivoire in Abidjan. 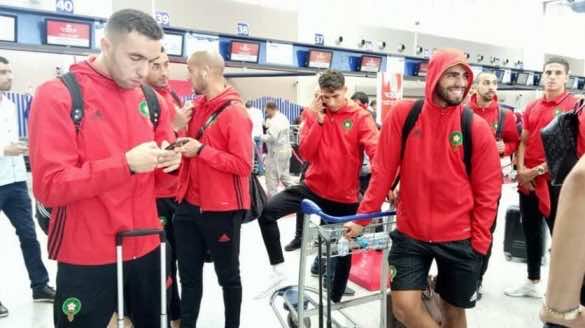 Rabat – Saturday night was an eventful night as a crowd of Moroccan fans headed to Rabat-Sale airport to greet their beloved team to Morocco after a blowout win over Cote d’Ivoire in Abidjan.

Upon their arrival at Rabat-Sale airport, members of the national football team and the Moroccan Football Federation (FRMF)  were received by a crowd of football fans, who warmly celebrated their team’s victory over the Ivorian squad.

Fouzi Lekjaa, President of FRMF told reporters that Morocco’s qualification to the 2018 World Cup is “well-deserved. Lekjaa, who is also the 3rd vice president of Confederation of African Football (CAF), stressed that the team’s players have thrilled the Moroccan fans during the game.

The president added that this achievement is the result of a lengthy work, which will be continued in the coming months.

For the team’s manager Herve Renard, the Atlas lions have delivered a “ very great game” that was awarded by this well-deserved qualification.

“I am delighted for all the Moroccan fans who have encouraged their national team throughout their appearances,” said Renard.

Immediately after the game, King Mohammed VI has spoke on the phone with the Frenchman in order to congratulate him and his team for their much-awaited victory.

The King has sent a congratulatory message to the Moroccan team, in which he lauded their great performance throughout the match.

In his message, the sovereign also wished a good continuation to the national team who raised the flag of Morocco and proudly defended the entire Moroccan people.

Mehdi Benatia, the team’s captain and key defender has also posted a video on his official Instagram account,through which he expressed his feelings after his squad win.

The defender said that Saturday’s clash “was hard,” thanking God for this achievement. The Moroccan-French footballer said that “[the team] has gave everything to win this game for the Moroccan fans, who are proud of us and proud to be Moroccans under any circumstances.”

“It’s been 20 years… 20 years is too much. Thanks God, we are going to take our childern and families to Russia. But we are not going there for tourism.”